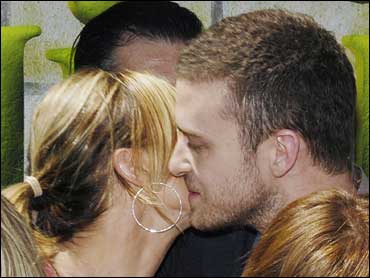 Forget the stars of the movie, the princess and the ogre, Fiona and Shrek. Most cameras were focused on another couple at the world premiere of "Shrek the Third": the movie actress and the pop star, Cameron Diaz and Justin Timberlake.

The longtime pair split late last year, and though there has been a report of at least one brief Hollywood encounter, the Sunday morning "Shrek" screening marked the first major media event at which they've been photographed together since the breakup.

Diaz, who voices Fiona, arrived first, making her way down the green carpet in a bright-salmon Chanel dress, staying close to costar Mike Myers. Timberlake, who plays would-be king Arthur, walked the press gauntlet just steps behind Diaz, though the two didn't appear to make eye contact during interviews. But, later, at the cast photo, they were more than cordial, greeting each other with big smiles and sharing a hug and kiss.

Though the film is one of the summer's most anticipated, the "Shrek" players were thrown a lot of questions Sunday about a couple of other hot entertainment topics. Many reporters attempted, and failed, to get reactions to Friday's sentencing of celebutante Paris Hilton to 45 days in jail for violating her probation on an alcohol-related reckless-driving charge.

"I think it's sad," CNN interviewer Larry King told AP Television. "But there's no excuse for drunk driving. None. You can't give me one good reason to drunk drive. Inexcusable," King continued.

"Saturday Night Live" alum Cheri Oteri, the voice of Sleeping Beauty in "Shrek," managed to tie some of the film's fairy tale themes to Hilton and her troubles. "You can be a princess in the positive sense of the word," she said. "Just don't keep going out to clubs all night. Stay home once in a while. Learn to cook. Read some books. Take a class."

The other buzz infiltrating the "Shrek" gala involved the summer's new blockbuster of blockbusters, "Spider-Man 3," which raked in a record $148 million at the domestic box office this weekend, bringing its worldwide gross to an astounding $375 million.

With the release of "Shrek the Third" on May 18 sandwiched between "Spider-Man 3" and the May 25 arrival of "Pirates of the Caribbean: At World's End," some observers wonder how many mega movies the marketplace can support at one time.

"I think the question is more to the other films," said "Shrek" producer Aron Warner. "We've been here. This is our third time at the same date," he continued. "I think the success of `Spider-Man' only bodes well for us. For me, it means people are dying to go to the movies. And the more the better."

The "Shrek" headliners turned out in full force for the Sunday premiere. In addition to Diaz, Timberlake and Myers, the star attendees included Julie Andrews, Antonio Banderas, Rupert Everett, as well as Eddie Murphy, who talked about what sets "the Third" apart from the first two.

"I think they've incorporated all the characters more," Murphy said. "The story isn't so much Shrek and Donkey and Fiona. It's everybody, everybody's got funny stuff to do. But what's remained consistent is the sweetness: a sweet little message in the back, and what's in the front is very, very funny and inventive."

The new film finds Shrek and Fiona living happily ever after in the land of Far Far Away. But then the king dies and Shrek is asked to take the throne. The problem is, he doesn't want the gig, and evil Prince Charming does. Mayhem ensues, including an accidental body-switching for Murphy's "Donkey" and Banderas' "Puss in Boots."

"I could say that I did my own stunts in this movie," joked Banderas, who attended the premiere with actress-wife Melanie Griffith. "Let me just say it was very dramatic being in his body for 15 minutes. I survived it, though."

With hundreds of attendees, big stars everywhere, cameras whirring and reporters posing questions endlessly at the gala opening, what ight Shrek himself think of the whole affair? "He would say, `This is Shrek-tastic,'" replied Myers, who voices him. "Be happy that the wait is ogre."