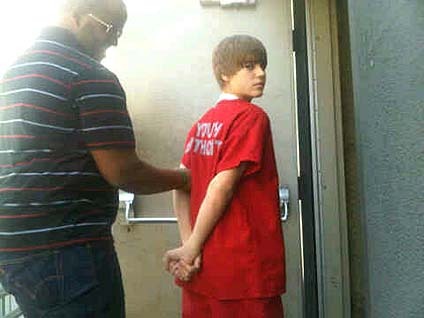 The 16-year-old "Somebody To Love" singer tweeted pictures of himself from the set where he was seen in a prison jumpsuit with his hands behind his back. The caption to the photo read in part: "I told you I was a BAD MAN!!"

According to The Insider, Bieber's character in the crime drama is an at-risk youth facing a terrible decision regarding his only brother - a decision that leads him into an explosive confrontation with the crime scene investigators. It's the start of an emotional story that will culminate later in the season.

To prepare for his acting debut, the pop star enlisted an acting coach and tweeted to fans that he's "learning 'a new craft'."

Bieber also tweeted another behind the scenes photo from his time on set, showing him holding up a prop arm. He tweeted: "And this guy?? He did not have such a great day. Lol. Thanks to everyone at 'CSI' for having me."