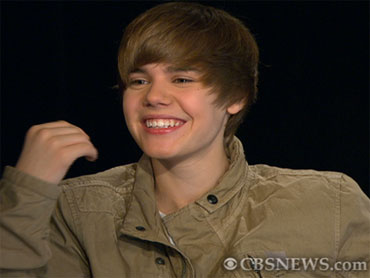 Justin Bieber is standing by his manager, who surrendered to police Wednesday in connection with a mall fan frenzy that sent five people to a hospital with minor injuries last year.

Scott "Scooter" Braun pleaded not guilty to charges of reckless endangerment, criminal nuisance and endangering the welfare of a child.

"My mother and I are 100 percent behind my manager," the 16-year-old singing sensation said in a statement released to The Associated Press on Wednesday night. "He is someone of high moral character and principle. The decisions he made that day were to protect the safety of myself and my fans and I am very thankful to have someone in my life who watches over me the way Scooter does."

Braun's arrest stemmed from a planned appearance in November by Bieber at Roosevelt Field Mall in Long Island. Authorities claim Braun didn't send out a tweet fast enough to let the raucous crowd of 3,000 know Bieber wouldn't be making an appearance.

Nassau County police canceled the event when the crowd became unruly. But some fans refused to leave, crowding the narrow area outside the clothing store where Bieber was scheduled to sign autographs. Five people were taken to hospitals with minor injuries.

"People started screaming, 'Justin!' And they ran forward and the ropes collapsed," said 13-year-old Aimee Macchi, who was knocked to the floor in the rush.

According to a release from the district attorney, police efforts were hindered by a message from Bieber's Twitter account to fans stating: "On my way to Roosevelt Field Mall in Long Island, NY to sign and meet fans! I'm pumped. See u there."

The release said police asked James Roppo, a senior vice president of Island Def Jam Records, Bieber's record label, to send out a tweet telling fans that the event was canceled. Island Def Jam employees also contacted Braun to send out the tweet. An hour later, no tweet was sent and the crowd remained.

Roppo was arrested for not cooperating with attempts to break up the crowd. He was charged with a series of misdemeanors, including endangering the welfare of children and obstructing governmental administration. His case is pending.

When police called Braun, he told them he "was in a meeting in Manhattan without access to a computer," according to the district attorney. When told that he would be arrested, he asked police to make sure they spelled his name right on the warrant, the release said.

Braun sent two tweets 1 1/2 hours later about three minutes apart, once Roppo called him after being placed under arrest, according to the district attorney. The crowd dispersed within 15 minutes. Bieber never made it inside the mall.

Braun's lawyer, Ravi Batra, said his client responded promptly to the police request, finding a computer and sending the tweets in seven minutes. He is hoping the district attorney reopens the investigation.

The 28-year-old Braun faces up to a year in jail if convicted.

Bieber caught the attention of the music industry after he began posting videos of himself singing on YouTube. His album "My World 2.0," with the hit song "Baby," was released Tuesday.

Bieber wore a T-shirt with the words "Free Scooter" imprinted on it Wednesday as he was met by a group of screaming fans in Chicago.

A spokesman for the DA's office said the timing of the manager's arrest with the album release was a coincidence.
By Megan K. Scott