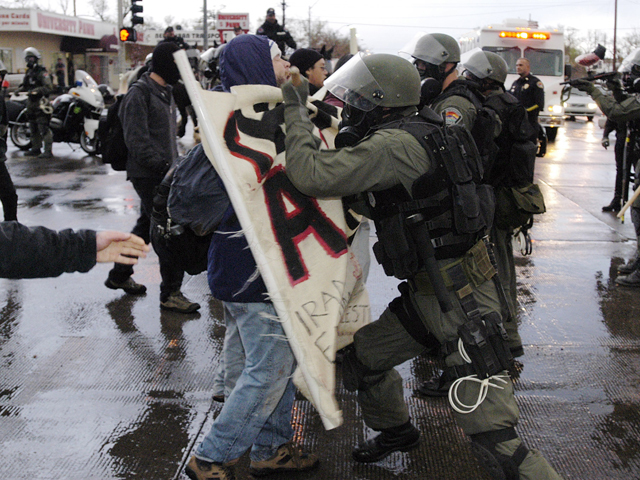 ALBUQUERQUE, N.M. The U.S. Justice Department is launching an investigation of the Albuquerque Police Department after a string of officer-involved shootings and high-profile abuse cases that allege the use of excessive and deadly force, officials said Tuesday.

The announcement of a civil probe comes months after the police department in New Mexico's biggest city was the target of protests, lawsuits and demands for wide-scale agency overhaul from civil rights advocates. The city has seen 25 officer-involved shootings — 17 of them fatal — since 2010.

In addition, the Albuquerque Police Department has been plagued in recent months by a number of high-profile cases alleging excessive force by officers, including some cases caught on video.

One video showed officers giving each other celebratory "belly bumps" after beating a suspected car thief in a parking garage. Another clip showed an officer illegally entering an apartment and using a stun gun on one suspect, then punching another suspect after he had surrendered.

The department also changed its social media policy involving officers after a detective shot and killed a man last year and listed his occupation as "human waste disposal" on his Facebook page. The detective was later suspended and transferred out of the department's gang unit to field services.

"Police officers are entrusted with extraordinary power, including the power to use deadly force, and police departments have a responsibility to ensure that officers exercise that power within the law," Thomas E. Perez, Assistant Attorney General for the Civil Rights Division, said at a news conference in Albuquerque.

"Our investigation will include a thorough review of APD's policies and practices, as well as outreach to the community and other stakeholders, to identify root causes of misconduct if we discover that there have been systemic violations of the law."

Perez said the investigation into Albuquerque police was a civil probe, not a criminal one, and will involve investigators looking at policies and training in the department concerning excessive force.

"We're looking at systems issues," said Perez. "How do the policies and practice on paper compare to what is happening on the field?"

Perez said investigators will determine if any system changes are needed within the police department.

Perez said the review has no timeline but similar probe have taken around a year. Some of the reviews resulted in cities being required to adopt new policies while others result in no findings, he said.

"These first meetings with DOJ during the past few days have been positive and they're producing meaningful dialogue," Berry said.

He declined to say whether he thought the Justice Department investigation into the police department would damage the city's reputation.

For months, Berry and Albuquerque Police Chief Ray Schultz have sought to stave off a possible federal probe into the department by instituting a number of reforms and raising hiring requirements for incoming cadets.

A report from an outside group last year called for changes in training and other procedures, including requiring officers to undergo more training on how to calm potentially violent situations and changing hiring criteria to focus on individuals with good problem-solving and communications skills. The report also made several recommendations on helping police deal with the mentally ill.

In September, the Albuquerque Police Department released information that compared new policies with other cities, saying they were stricter than those required under federal consent decrees in New Orleans and Seattle.

The department also this year began requiring all officers to wear lapel cameras when interacting with the public. Schultz said the lapel cameras and the release of videos involving alleged abuse show that his department was being transparent and responding to community concerns about Albuquerque police.

Jewel L. Hall, president of the Martin Luther King, Jr. Memorial Center Board and an outspoken critic of the police department, said she was pleased that the U.S. Justice Department was finally looking into the practices of the Albuquerque police. "I knew it was going to take time," said Hall. "I hope we see some changes."