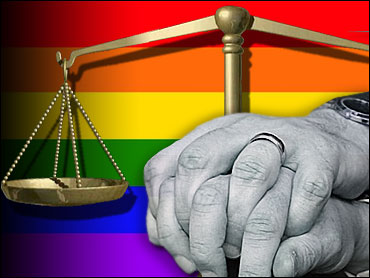 Over the past few years the issue of the constitutionality of same-sex marriage has reached supreme courts in Massachusetts, California, Washington, New Jersey and New York. In the course of those bitterly-contested cases hundreds of lawyers have filed hundreds of briefs containing tens of thousands of pages of argument and slick barristers have spent scores of hours in oral argument debating the merits of issue before Democrat-appointed judges, Republican-appointed judges, so-called "liberals," so-called "conservatives" and so-called "activists."

There is not, in other words, anything resembling a clear judicial consensus that has emerged from these cases. The Massachusetts ruling back in 2003 may have generated an enormous religious and political backlash and thereby contributed to the scores of state constitutional prohibitions against same-sex marriage. But the judiciary has neither piled on same-sex couples nor spastically rushed to their defense. That's important context to absorb as we endure a round of endless (and often silly) commentary about Thursday's California same-sex ruling.

We have not seen another case of "liberal judges run amok" - six of the seven justices on the California Supreme Court were appointed by Republican governors and three of these GOP-appointees (Justices George, Kennard and Werdegar) voted in support of same-sex marriage. Nor have we just experienced, as the dissenting justices noted, another example of judicial policy-making. Like it or not judges are granted the authority to determine which rights, among our many, are so fundamental to us that they may not be taken away by legislative fiat.

What we have just witnessed in California, and what we saw before in those other states, is a disparate group of judges struggle with a painfully close legal question that reasonable people could and do disagree upon. On Thursday, in striking down the state's same-sex marriage ban, the California Supreme Court cited its own 1948 decision striking down an interracial marriage ban. It's not incidental that the United States Supreme Court didn't follow suit for nearly 20 years -until 1967 - to do likewise. And who among us now would stand on a soap box and declare that interracial marriage has "ruined" the institution of marriage?

Honest judges have come up with candid rulings (read the New Jersey ruling, for example, and then reading the California ruling and then tell me that the judges involved were careless) that have elevated the debate over this contentious issue. For example, you can gain more insight reading these rulings than you can by listening to the claptrap offered by the presidential candidates. Anyone out there think that Hilary Clinton and Barack Obama don't in their heart of hearts believe that same-sex couples ought to marry? Didn't think so.

Indeed, now comes the political posturing. Already opponents of same-sex marriage are vowing to negate the California ruling by having voters authorize an amendment to the state constitution that would specifically prohibit such marriage. As amended, the state's constitution then would not support Thursday's ruling. But even if this occurs the bell cannot fully be un-rung. There will be thousands of same-sex marriages that were legal at the time they were finalized that would then be de-legitimized by a vote.

On the flip side, it's only a matter of time before a married same-sex couple sues in federal court to enforce the federal Constitution's "full faith and credit" clause that is designed to ensure some modicum of uniformity between the states. The language of the clause reads as follows: "Full faith and credit shall be given in each state to the public acts, records, and judicial proceedings of every other state…." In fact, if you are looking for a path that ultimately lands this entire controversy before the U.S. Supreme Court this clause probably is it.

So Thursday ends up being a day when questions in California were both answered and raised. Yes, Republican appointees also can see the merits of same-sex marriage. No, Massachusetts will not forever stand alone in recognizing the right. Yes, a decades-long battle for equal rights in California ends with a victory for same-sex marriage proponents. No, the war continues in the ballot box, if not in the courts. But if you say you know today where all of this is going, or how far the chaos will reach before order is again restored, you're a better man than I am, Gunga Din.