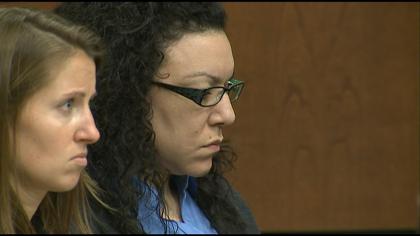 BOULDER, Colo. -- The statements and actions of a woman who cut an unborn baby from another's womb show she acted with the cool intent of an attempted murderer, prosecutors said Monday. The defense said that same evidence proves she was in too chaotic a state to have planned to kill.

The attack reignited the debate over the legal rights of fetuses. The judge reminded jurors before the start of deliberations at midmorning that an unborn child isn't considered a person under state law.

Wilkins sat quietly in the spectator section of the courtroom Monday during closing arguments in which many of the bloody details of the attack she endured were repeated. Lane sat expressionless next to her attorney, Kate Herold.

Herold told jurors Wilkins survived a "bizarre, heinous" attack, but they would have to set aside their feelings for the victim and find Lane guilty of attempted manslaughter, not attempted first-degree murder.

"The evidence proves that. But the evidence also shows you that she never planned, prepared or processed anything that happened on March 18," she said.

Weigel, citing trial testimony from Wilkins and a doctor, described Lane slapping, stabbing and choking Wilkins, and at one point bludgeoning her with a lava lamp. Then, Lane used two knives - switching after determining the first was too long - to cut the baby from her victim.

"After all of that, she's lying there with her guts hanging out, bleeding profusely," Weigel said of Wilkins. "What does this defendant do? She leaves her there to die."

Wilkins had responded to an advertisement Lane had placed offering free maternity clothes. For months, Lane had been telling friends and family that she was expecting a baby boy. She faked photographs of a pregnant belly and gave the man she said was the father a sonogram she had downloaded from the Internet.

Prosecutors say the man, David Ridley, did not want a baby. He had become suspicious because Lane had not yet given birth and was threatening to kick her and her two daughters out of their home, prosecutors said.

Herold, noting that Lane had even chosen a boy's name for the baby, said if she had planned the attack she would have found a victim who was carrying a boy. The lawyer also said Lane gave no thought to how she would explain her actions to police.

"Can't you plan a little bit better than that if you're cutting someone's baby out?" Herold said. "Not if you're making a hasty and impulsive decision, which is what Miss Lane did."

Weigel said that just because Lane planned poorly does not mean she did not plan. District Attorney Stan Garnett, who summed up the prosecution's arguments, said Lane's actions did not fit the definition of recklessness.