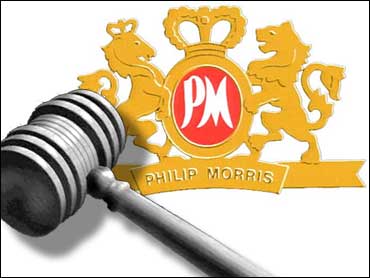 Philip Morris was ordered by a jury to pay $8 million in damages to the widow of a smoker who died of lung cancer in a case that could set a standard for some 8,000 similar Florida lawsuits.

The six jurors deliberated over two days before returning the award for Elaine Hess, 63, whose husband Stuart Hess died in 1997 at age 55 after decades as a chain smoker.

The award amounts to $3 million in compensatory damages and $5 million in punitive damages against Richmond, Virginia-based Philip Morris USA, a unit of Altria Group Inc. Hess's attorneys sought up to $130 million.

"It wasn't about the money from the beginning," Hess said after the verdict. "It was about doing the right thing. I just really hope this can help all the thousands of families who have also suffered."

The Hess case was the first to go to trial since the Florida Supreme Court in 2006 voided a $145 billion class-action jury award in the so-called Engle case, by far the highest punitive damage award in U.S. history. The court said each smoker's case had to be decided individually on its merits, but let stand that jury's findings that tobacco companies knowingly sold dangerous products and hid risks from the public.

To be included in those findings, smokers or their families had to file individual lawsuits by Jan. 11, 2008.

Altria, the Philip Morris parent, issued a statement calling the Florida legal procedure "profoundly flawed" and predicted the damage awards would be reduced or thrown out on appeal.

"We plan to challenge the verdict in the trial court and, if necessary, on appeal," said Murray Garnick, an Altria Client Services vice president and associate general counsel. "We do not believe today's verdict is predictive of the outcome of future cases."

The Hess trial, which began Feb. 3, included video of the widely discredited 1994 testimony before Congress in which top executives of the major tobacco companies, including Philip Morris, denied that smoking was addictive. The jury in the Hess case previously found that Stuart Hess was hopelessly addicted, even as Philip Morris attorneys pointed to evidence he was capable of quitting.

The jury did find that Hess was 58 percent responsible for the cigarette addiction that led to his death. If Philip Morris prevails on appeal, that could cut the compensatory damage award from $3 million to about $1.3 million.

The Hess case has been closely watched by the tobacco industry and by the thousands of other Florida smokers and survivors who have sued. Although it does not directly control the outcome of the other lawsuits, the Hess case could signal how many of them will turn out.

The original Florida lawsuit was filed in 1994 by a Miami Beach pediatrician, Dr. Howard Engle, who had smoked for decades and couldn't quit. The class of smokers was estimated at up to 700,000 when the giant $145 billion award was issued in 2000.

For decades, tobacco companies almost never lost lawsuits filed by smokers but have had several major judgments against them more recently. Philip Morris, for example, is currently appealing to the U.S. Supreme Court a $79.5 million jury award in an Oregon case; other large damage awards against the industry have often been reversed or reduced on appeal.