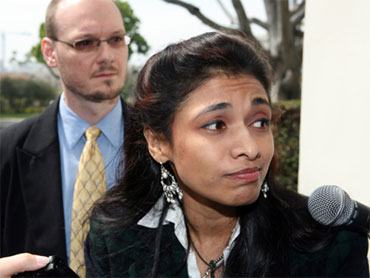 Convicted fashion designer Anand Jon Alexander should not be granted a new rape trial even though a juror flirted over the phone with the defendant's sister before a verdict was reached, prosecutors contend.

The district attorney's office on Thursday released a transcript of a recorded phone conversation between juror Alvin Dymally and Alexander's sister Sanjana in which the juror complimented her appearance and made plans to meet.

The defense claims the conversation is grounds to throw out a jury's finding that Alexander raped aspiring models, while prosecutors say the talk was just flirtatious banter and not about the defendant's guilt or innocence.

"The tape speaks for itself," Deputy District Attorney Frances Young wrote in prosecution's argument against a new trial. "It appears to capture a conversation in which Dymally wanted to privately tell Sanjana that he thought she was 'sexy' and that he wanted to see her 'afterwards.'"

Leonard Levine, the fashion designer's attorney, said there are parts of the conversation that have not been transcribed, including when Dymally told Sanjana Alexander that he loved her. Levine said Dymally changed his vote from not guilty to guilty in November after Alexander refused to meet with Dymally during jury deliberations.

"I think it's clear that he was in love with her," Levine said. "He was hardly an impartial juror."

In the transcript Dymally complimented Sanjana Alexander's eyes and long hair. The defendant's sister, who testified she called the juror because she was scared of angering him, did not say much beyond "thank you."

"I know you don't want to say much, but maybe afterwards I'll speak to you," Dymally said to her. "I'll do every possible thing I can do."

During the trial Sanjana Alexander was told not to talk or have any contact with witnesses and was removed from the courtroom after violating this directive. She called Dymally twice after the juror slipped his phone number in a note and taped one of the conversations, prosecutors said.

Young chastised Alexander's behavior but pointed out that the phone calls did not prejudice the juror's verdicts in the trial. Alexander came forward with the tape following her brother's conviction on Nov. 13. 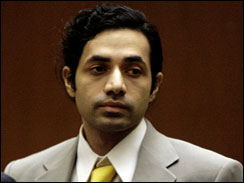 (AP Photo/Nick Ut)
A hearing is set to resume Monday on the new trial request for the 35-year-old fashion designer (left), who was convicted on more than a dozen counts of luring females to Los Angeles and sexually assaulting them. His seven victims ranged in age from 14 to 21.

The designer has been featured on the television show "America's Next Top Model" and worked with such celebrities as Paris Hilton and Mary J. Blige.
By Associated Press Writer Noaki Schwartz