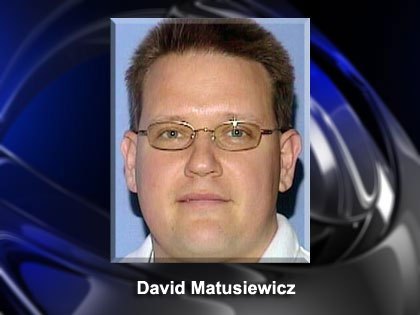 WILMINGTON, Del. -- A federal jury on Friday found that the death of a woman shot by her former father-in-law at a Delaware courthouse in 2013 was the result of cyberstalking by the gunman's widow and two children, convicting the three defendants on all counts in a nationally unprecedented verdict.

Jurors reached their decision after a month-long trial, finding former optometrist David Matusiewicz; his mother, Lenore; and his sister, Amy Gonzalez, guilty of stalking resulting in the death of David's ex-wife, Christine Belford.

"It is an unprecedented verdict. It is the first of its kind in the country. We certainly believe it was appropriate charges," said Delaware's U.S. Attorney Charles Oberly III. "I just hope there is some sense of justice for the family."

Justice Department officials have said they believe there had -- until this case -- been no precedent for a person being convicted on federal charges of cyberstalking resulting in death, which carries a possible life sentence.

The defendants did not show any visible emotion when the verdicts were read Friday morning, though Amy Gonzalez began weeping as the jury left the courtroom, holding her hands in a prayerlike fashion against her forehead. All three are to remain in custody pending sentencing, scheduled for Oct. 15.

The defendants had denied knowing that Thomas Matusiewicz planned to kill Belford.

"Domestic violence takes many forms -- from psychological and emotional abuse, to physical violence and even murder.... What began here as group-based, digital domestic violence, escalated into two murders," prosecutors led by Jamie M. McCall said in an emailed statement. "We hope that today's verdict brings a sense of justice and peace to everyone impacted by these crimes."

Defense attorneys had no immediate comment after the verdict.

The hearing was part of a long and bitter court battle over the three daughters Belford had with David Matusiewicz, who went to federal prison and later lost his parental rights after he and his mother kidnapped the children and took them to Central America in 2007, purportedly because of concerns about abuse and neglect by Belford.

Prosecutors alleged that, after the kidnapping, David Matusiewicz conspired with his parents and sister over several years to spy on, torment and stalk his ex-wife, and that the family repeatedly and falsely accused Belford in emails, letters, phone calls, and Internet postings of abusing and neglecting the couple's daughters.

The evidence they presented included a red notebook found in the car driven to the courthouse by Thomas and David Matusiewicz. Prosecutors described the notebook, which contained a purported "hit list" of people who had participated in court proceedings involving Belford and David Matusiewicz, as a "stalking playbook."

A core element of the stalking campaign, according to prosecutors, was the allegation that Belford had sexually abused the couple's oldest daughter -- a claim that prosecutors say was deliberately false and which was refuted by the girl, now 13, in closed-door testimony.

The sexual abuse allegation also was found not credible by the federal judge who sentenced David Matusiewicz in 2009 for kidnapping and bank fraud, and by the state Family Court judge who terminated his parental rights in 2011.

Prosecutors argued that the sexual abuse claim was concocted after the kidnapping as an excuse for the girls being abducted, but three witnesses testified that the Matusiewicz family had expressed concerns about possible abuse by Belford as early as 2006, well before the kidnapping. Defense attorneys also noted that Gonzalez and Lenore Matusiewicz passed lie detectors tests in 2011 about the allegations of sex abuse.

Defense attorneys argued that David Matusiewicz, who was inside the courthouse during the shooting, was the target of a rush to judgment because he was "persona non grata" after the 2007 parental kidnapping.

Defense attorney Ken Edelin had told jurors during the trial that it was "utterly ridiculous" to believe that the Matusiewicz family conspired to have Belford killed in a crowded courthouse lobby filled with police and security cameras to help them achieve their goal of having the children reunited with David.

But prosecutors had noted at trial that the defendants did not have to know that Tom Matusiewicz planned to kill Belford in order to be found guilty, but only that Belford's death was "reasonably foreseeable" or a "natural consequence" of their actions.

A key issue for jurors was whether members of the Matusiewicz family targeted Belford with criminal intent, deliberately causing harassment, fear of bodily harm and emotional distress, or whether there was another reason for their conduct and statements regarding her.