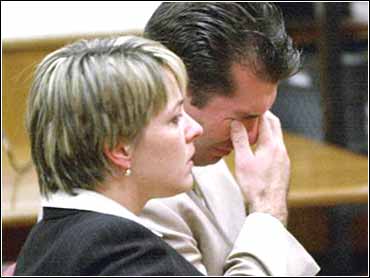 One day after being acquitted of sexually assaulting a teen-ager, Mark Chmura broke down in tears as he apologized for his conduct and hoped to resume his NFL career.

"I know as a Green Bay Packer and as a professional athlete, I've disappointed many, many people. And for that I am truly sorry," Chmura said Sunday, one day after a jury acquitted him of sexual assault. "I promise you nothing like this will ever happen again."

The foreman of the jury that acquitted Chmura of sexually assaulting a 17-year-old girl said the football star is guilty of one thing: bad judgment.

"He put himself in a bad situation by being drunk with kids and in a hot tub in his underwear," foreman Brad Breidenstein, a 38-year-old bar manager from Janesville, said Sunday.

But the jury disagreed with District Attorney Paul Bucher's contention that Chmura went from frolicking around in wet boxers with drunken teen-agers to luring the girl into a bathroom and sexually assaulting her last April 9.

Chmura was acquitted Saturday night of charges of child enticement and sexual assault that carried up to 40 years in prison.

Inside Formula E, the eco-friendly future of auto racing

"None of us believed nothing happened. We all believed something happened in there," said a 59-year-old female juror who asked that her name not be used. "But we had no evidence to prove it."

Breidenstein said without any DNA evidence, it was hard to prove anything.

"We all agreed that they were in that bathroom together. But we don't really know what took place," Breidenstein said. "It was like (defense lawyer) Gerald Boyle said: `She got caught in the bathroom with a married man and now she's got to get out of this little predicament.' "

Bucher insisted he proved during the trial that Chmura had inappropriate sexual contact with a minor.

"The evidence clearly indicates there was sexual contact," the prosecutor said. "The real issue became if it was consensual or not. That was an issue for the jury to decide. The jury found we were not able to prove that beyond a reasonable doubt, probably for a variety of reasons."

"Baloney," Boyle said. "I argued there wasn't any sexual contact. That's what the jury found,"

At a news conference in which Boyle didn't allow his client to discuss what happened at the party because of the threat of a civil lawsuit, Chmura broke down crying.

"This has opened my eyes up to a lot of things," Chmura said. "And like I said, I disappointed a lot of people. And for that I am truly sorry."

Chmura said he would celebrate his acquittal by going to Disney World - no kidding - and that he plans to resume his pro football career.

"I'm ready to get back to work," he said. "I plan on suiting up for someone next year."

Chmura's agent, Eric Mtz, said several teams have inquired about Chmura, who was cut by the Packers after he was charged and replaced by first-round draft pick Bubba Franks.

"I'm a free agent right now and there's 30 teams out there. And as far as I know, the Green Bay Packers are one of those 30 teams," Chmura said.

The Packers cited a salary cap crunch when the jettisoned Chmura, 31, a three-time Pro Bowl tight end. After his acquittal, the only response from the team was a terse statement from president Bob Harlan that read: "We're just glad that it's over."

Chmura said his neck injury that put his career in jeopardy in 1999 is no longer an issue and that two doctors have given him medical clearance to play.

Boyle said Brett Favre and other former teammates wanted to attend the trial but he advised against that because "I didn't want any public perception that we needed those people to bring justice."

The deciding factor was the testimony of two teens, Michael Kleber and Val Buscemi, Breidenstein and the 59-year-old juror said.

Kleber testified that he warned the accuser not to enter the bathroom and that she turned to him, smiled and went in anyway. Buscemi said Chmura's accuser told her she been inappropriately touched by Chmura in a hot tub before the alleged sexual assault in the bathroom.

Chmura's accuser denied both accounts by the star defense witnesses.

Breidenstein said that when the jury got the case, a secret straw poll found there were five guilty votes on sexual assault, which carries 10 years in prison. After debate and two more polls, the vote to acquit was unanimous.

After a few bites of pizza, the jury quickly took up count No. 2, child enticement, which none of the jurors realized was by far the more serious of the two charges, carrying 30 years in prison, Breidenstein said.

Two jurors who voted guilty on the first straw poll for that charge changed their votes on the second poll, he said.

Both of the alternate jurors also would have voted to acquit Chmura on both counts, according to one of them, a 51-year-old mechanic from Janesville.

After the verdicts, jurors spent one last night at the hotel where they were sequestered during the 10-day trial.

"We went to the bar and had a couple of drinks," Breidenstein said. "And we all agreed we did the right thing."