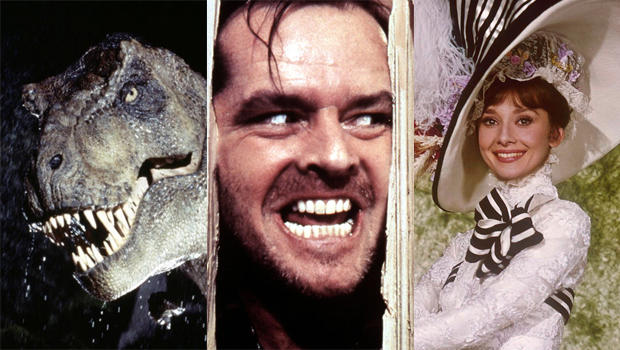 The computer-generated dinosaurs of "Jurassic Park," the ghostly apparitions of "The Shining," a timeless filming of the Broadway musical "My Fair Lady," the landmark same-sex Western romance "Brokeback Mountain" and "Monterey Pop," a vivid collection of rock's greatest acts recorded during the "Summer of Love," are some of the films being inducted today into the Library of Congress' National Film Registry.

Twenty-five films are added each year to the Registry, which includes Hollywood and independent features of all genres, as well as documentaries, animation and experimental films, newsreels, and even home movies, to be preserved for future generations. Librarian of Congress Carla Hayden announced Wednesday this year's 25 additions, chosen for their cultural, historic and aesthetic importance to America's film heritage.

The titles include Stanley Kubrick's "The Shining," about a haunted hotel and its effects upon a caretaker and his family living there in isolation over the winter months; Steven Spielberg's blockbuster "Jurassic Park," which vaulted the art of special effects to new heights; the musical "My Fair Lady," starring Rex Harrison and Audrey Hepburn as Henry Higgins and Eliza Doolittle, the Cockney flower seller who is trained to become an aristocratic lady; and "Monterey Pop," a 1968 concert film featuring such artists as Jimi Hendrix, Janis Joplin, Otis Redding and Simon & Garfunkel.

Also: the 2005 Western "Brokeback Mountain," starring Heath Ledger and Jake Gyllenhaal as ranch hands who share an intimate relationship for years despite marriages, parenthood and self-torment in the face of rampant homophobia; "Leave Her to Heaven," a classic Technicolor film noir starring Gene Tierney as the femme fatale; "Rebecca," the 1940 Alfred Hitchcock thriller, his only film to win an Oscar for Best Picture; "Hud," starring Paul Newman as a cold-hearted, modern-day cowboy; and the Western "One-Eyed Jacks," the only film to be directed by its star, Marlon Brando.

The earliest film added this year is the 1898 "Something Good - Negro Kiss," the first on-screen kiss featuring African-Americans.

For details about each of the 25 films named this year check out the gallery below.

The 2018 additions bring the total number of films in the Registry to 750.

While spotlighting cinematic achievements of the past, the Registry also protects our nation's film heritage by requiring preservation copies of each title be stored at the Library. Because of the fragility of motion picture film, about 70 percent of films from the early years of cinema are lost – damaged, deteriorated, destroyed by fire, or neglected by the studios that created them.

"The National Film Registry turns 30 this year, and for those three decades, we have been recognizing, celebrating and preserving this distinctive medium," said Hayden. "These cinematic treasures must be protected because they document our history, culture, hopes and dreams."

On Wednesday Turner Classic Movies will feature a selection of motion pictures named to the Registry this year beginning at 8 p.m. ET. Hayden will be joined by movie critic Leonard Maltin to discuss the films.

In addition, selected titles from 30 years of the National Film Registry are freely available online, at the National Screening Room on the Library's website.

Want to nominate a movie to the National Film Registry? Visit the Library of Congress' nomination page here.

Films Selected for the 2018 National Film Registry (in alphabetical order):