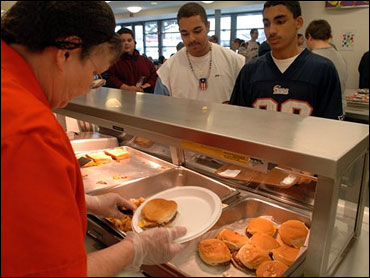 Candy, soda, pizza and other snacks compete with nutritious meals in nine out of 10 schools, a government survey found.

Already plentiful in high schools, junk food has become more available in middle schools over the past five years, according to the Government Accounting Office, the investigative arm of Congress.

"Parents should know that our schools are now one of the largest sources of unhealthy food for their kids," Sen. Tom Harkin, who asked for the study, said in an interview.

"Would anyone advocate that we take the fences off the playground for elementary schools and just let kids run around in the streets?" Harkin, D-Iowa, said. "By the same token, why would we allow schools to sort of poison our kids with junk food?"

Obesity among children and teenagers more than doubled in the past three decades, according to the government-chartered Institute of Medicine. Obese kids will become adults with chronic health problems, said Harkin, the senior Democrat on the Senate Agriculture, Nutrition and Forestry Committee.

He and other lawmakers want the government to set nutrition standards for food throughout schools and not just in the cafeteria.

Giving kids healthier options "should not be a suggestion, it should be a requirement," said Sen. Patrick Leahy, D-Vt., another committee member. Kids are suffering from higher rates of diabetes, high blood pressure and other illnesses normally associated with adults, said Rep. George Miller, D-Calif.

The Agriculture Department had restricted sales of competitive foods until a 1983 federal court ruling, in a lawsuit by the National Soft Drink Association, limited its regulation to food service areas such as cafeterias during mealtime.

The GAO sampled schools that participate in the Agriculture Department's federal school lunch program, which subsidizes school meals and regulates their nutritional content. Those meals have to follow the government's dietary guidelines, which call for eating more fruits, vegetables and whole grains and less calories, fat, added sugars and sodium.

The GAO reported that of 656 schools in its sample, 51 percent of principals and school food directors responded to a Web-based survey. Investigators also traveled to six school districts that have tried to substitute healthier choices for less nutritious foods. The survey's margin of error was plus or minus 15 percentage points.