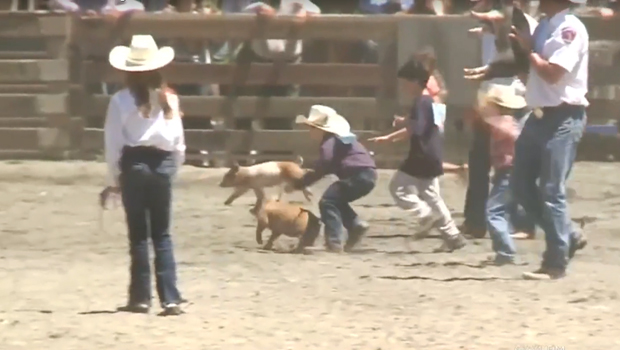 WOODSIDE, Calif. -- Squeals, both human and porcine, pierced the air on a sunny Fourth of July as children under the age of 10 raced to be the first to snatch a running pig by its hind legs.

It's an annual event called the Pig Scramble, organized by the Mounted Patrol of San Mateo, as part of its junior rodeo.

Parents say it's a harmless game, but animal rights protesters are calling it something else: cruelty to animals.

Belle Stafford called the event "very distasteful ... we don't think it's right what they are doing to the pigs.

"It's teaching [children] that it's OK to use animals for entertainment, to treat them like toys. And these are live, very intelligent beings," Stafford said.

Terri Ducay told CBS Station KPIX she'd like to see the competition cancelled. "I think there are other forms of entertainment for children," she said.

One parent who spoke to KPIX correspondent Mark Kelly said he loves the event. "If it's well-supervised and well-managed and pigs don't truly get hurt, I don't think it's cruelty," said Terry Hicks, whose nine-year-old daughter once won first place in the event.

Even if the pigs are squealing? "Pigs squeal!" Hicks laughed." "I've never heard a pig that doesn't squeal."

Rodeo organizers say they have listened to the protesters, but don't believe the Pig Scramble hurts either the kids or the pigs.

Captain Terry Welcome with the Mounted Patrol told KPIX, "I competed in many Pig Scrambles and it did not teach me to be cruel to animals."

Protesters and event organizers have agreed to meet in a couple weeks to see if they can find common ground.