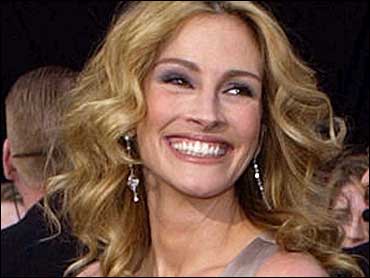 It seems that everywhere you look these days, you see another set of twins.

Julia Roberts gave birth to a boy and girl over the weekend. Actress Geena Davis had twin boys in May. Actress Jane Seymour had twins. And just two months ago, The Early Show featured a school that had 11 sets of twins in its pre-kindergarten through fifth grades.

Dr. Emily Senay, the mother of 5-year-old twin girls, Ruby and Lucy, says, "It does seem strange. If you to the park, everywhere you look, there are mothers pushing double strollers.

"There are actually several factors that increase the possibility of having a multiple births. Some women are more likely than others to give birth to twins.

"One of the factors that seems to be playing a big part in this increase is the advancing age of mothers. Women in their 30s and 40s have higher hormone levels than younger women. That means that, as women get older, their ovaries are stimulated to produce more than one egg at a time. It's the body's way of trying to ensure that you get pregnant while your body is still young enough to handle the strains of pregnancy.

"Next, the number of previous pregnancies factors in: The more pregnancies a woman has already had, the higher her odds of conceiving twins.

"Heredity also plays a big part. A woman is more likely to conceive fraternal twins if she is a fraternal twin or if they run in her family.

"And finally, fertility treatment. If you're taking fertility drugs, they encourage the ovaries to drop more than one egg during ovulation, so you have a lot of twin and multiple births in those cases. In addition, doctors typically implant more than one embryo in the womb during in vitro fertilization, so you have many more multiple births there. With more and more women having babies in their 30s, 40s and even 50s, many using some type of fertility treatment, it's no surprise that the rate of twins has gone up so much.

Roberts had her twins roughly a month early, and Senay says that's not surprising: "The normal length of gestation for a single baby is 40 weeks. But for twins, it's usually closer to 38 weeks. This is because of the increased demands on the mother's body. It's hard enough to be pregnant with one baby. To have two or more … really takes a toll on your body. That also means that, since twins are usually premature, they typically have lower birth weights.

Is it tough having to care for two infants at once? "It's a little bit of a challenge, as I'm sure Julia Roberts will discover," Senay said, chuckling.