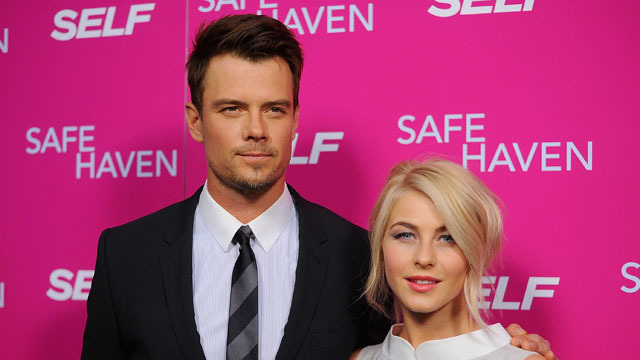 A new movie based on a Nicholas Sparks novel is arriving in theaters just in time for Valentine's Day.

Two-time "Dancing with the Stars" champion Julianne Hough stars in the romantic drama "Safe Haven" as Katie, a woman who runs away from her dark past and meets small-town widower Alex, played by Josh Duhamel.

"Safe Haven" was directed by acclaimed filmmaker Lasse Hallstrom, whose previous works include "My Life As a Dog," "What's Eating Gilbert Grape" and "Chocolat," among many others.

Hough, Duhamel and Hallstrom were on the New York red carpet Monday night for a special screening of their new movie, although Hough's significant other, "American Idol" host Ryan Seacrest, and Duhamel's wife, Fergie of the Black Eyed Peas, were not in attendance.

Check out the video above to see the stars and their director speak to CBSNews.com on the red carpet.