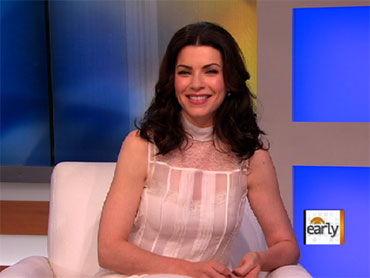 With more than 13 million viewers and nine Emmy nominations, "The Good Wife" was the breakout drama of last season. Tonight, Julianna Margulies returns as the title character, Alicia Florrick, a lawyer balancing her complicated personal life with a high-pressure career.

Margulies sat down with "Early Show" co-anchor Harry Smith to discuss the exciting new season, which she calls "very well-written" and "more sophisticated."

"This is very big political backdrop this year, too. On top of the law. On top of the personals. So it's a fun mix, such a fun character to play," she said.

Since the writers are taking it up a knotch, the story line is really starting to sizzle. Her character has "flirted with a relationship" with one of her fellow lawyers, Will Gardner (Josh Charles) and is now torn between two lovers, which includes her philandering husband, Peter Florrick (played by Chris Noth).

People on the street even approach Margulies about her character's decision.

"They do. They're very invested in who this character should be with. And what she should do in her romantic life," she said.

Michael J. Fox will also guest-star in an episode in which he will play a lawyer with Parkinson's who represents a pharmaceutical company.

"And it's truly a spectacular thing to watch. And he's so good at it," she said. "And he said to me it was very freeing for him because it was the first role he played with Parkinson's where he gets to have Parkinson's and he doesn't have to hide anything."

Margulies is also known for her romantic role with "ER" co-star, George Clooney.

So, will she be forever connected to Clooney -- and is he really a good kisser?