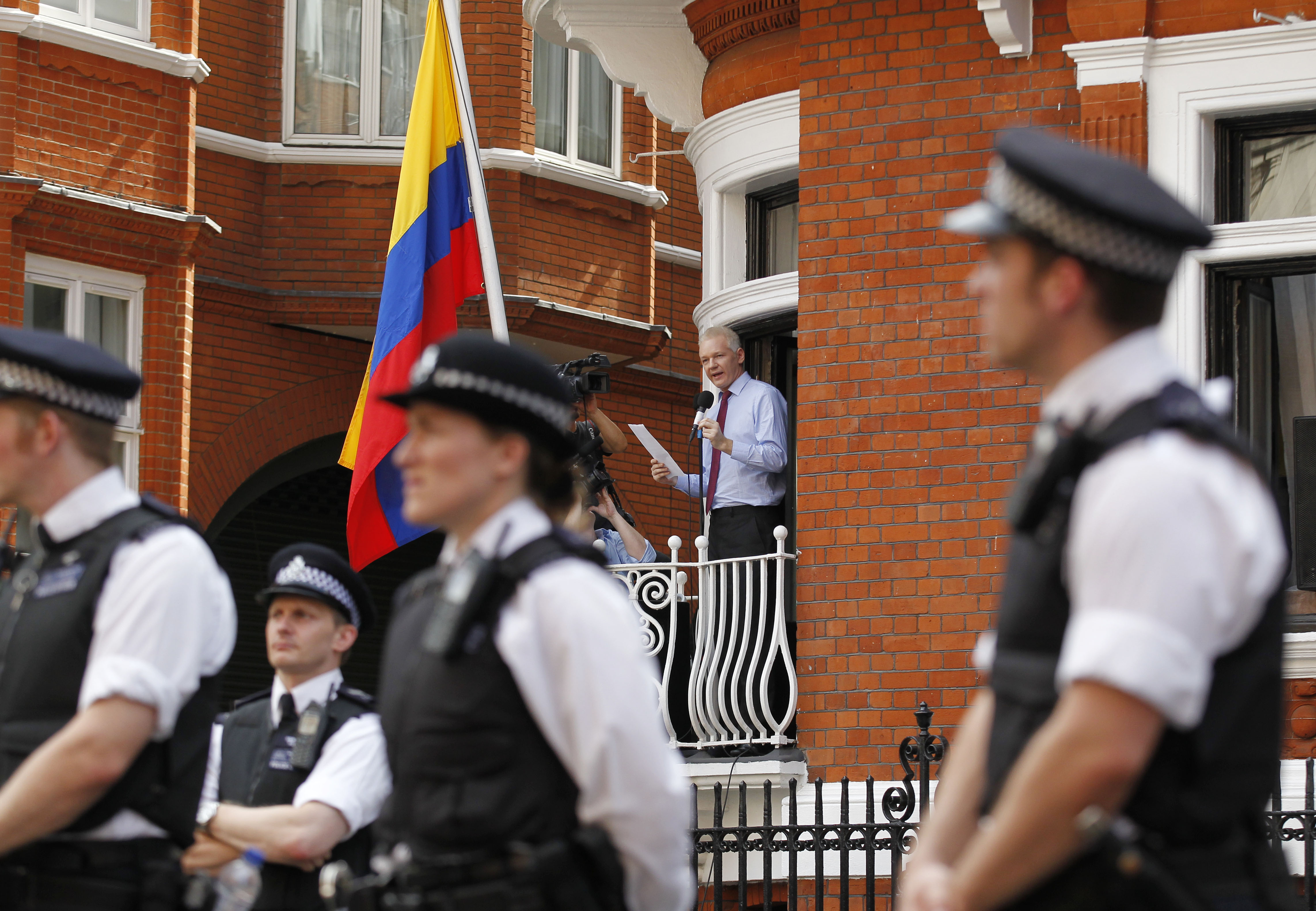 LONDON -- British police on Monday removed a round-the-clock guard from outside the Ecuadorean Embassy hideout of WikiLeaks founder Julian Assange, saying it wasn't "proportionate" to keep up the operation when no end to the three-year stalemate is in sight.

The Metropolitan Police said the force would still do its best to arrest Assange, who sought refuge at the London embassy in June 2012 while facing extradition to Sweden for questioning about alleged sex crimes.

The force said that because there is "no imminent prospect of a diplomatic or legal resolution to this issue" a round-the-clock police presence is "no longer proportionate."

Ecuador has granted Assange political asylum, but he faces arrest if he leaves the embassy. No police were visible outside the upscale Edwardian apartment block that holds the embassy on Monday afternoon - just journalists and a pizza delivery man with a box addressed to Assange.

The head of Britain's diplomatic service, Simon McDonald, summoned Ecuador's ambassador to the Foreign Office on Monday to express "deep frustration" at the lack of progress in resolving the standoff.

The 24-hour police operation has been controversial in part because it is so costly. Police say the operation cost 11.1 million pounds ($17.6 million) through April 2015.

The police force said in a statement that Assange is still subject to arrest for jumping bail and holing up in the embassy while wanted for questioning over sexual assault allegations in Sweden. It said if he leaves the embassy, the force will "deploy a number of overt and covert tactics to arrest him."

In August, Swedish prosecutors dropped cases of alleged sexual misconduct against the 44-year-old Australian computer hacker, but still want to question him about accusations of rape made after his visit to the country in 2010.

Assange denies all the allegations and believes extradition to Sweden is merely the first step in efforts to bring him to the U.S. over WikiLeaks' secret-spilling activities.

WikiLeaks spokesman Kristinn Hrafnsson said removing the police officers did not change Assange's situation. He said Britain "could have resolved this situation a long time ago by giving an absolute guarantee that Julian would not be extradited to the United States."

Swedish officials have held talks with Ecuador about questioning Assange at the embassy in London, so far with no result.

Ecuador's deputy foreign minister, Xavier Lasso, said "substantial advances" had been made toward an agreement with Sweden about questioning Assange inside the embassy. He said a new meeting on the subject would be held in Quito later this month.

Lasso called the removal of the police "a coherent step. It's what we've been asking the British to do all along in the face of their complaint that it costs a lot."