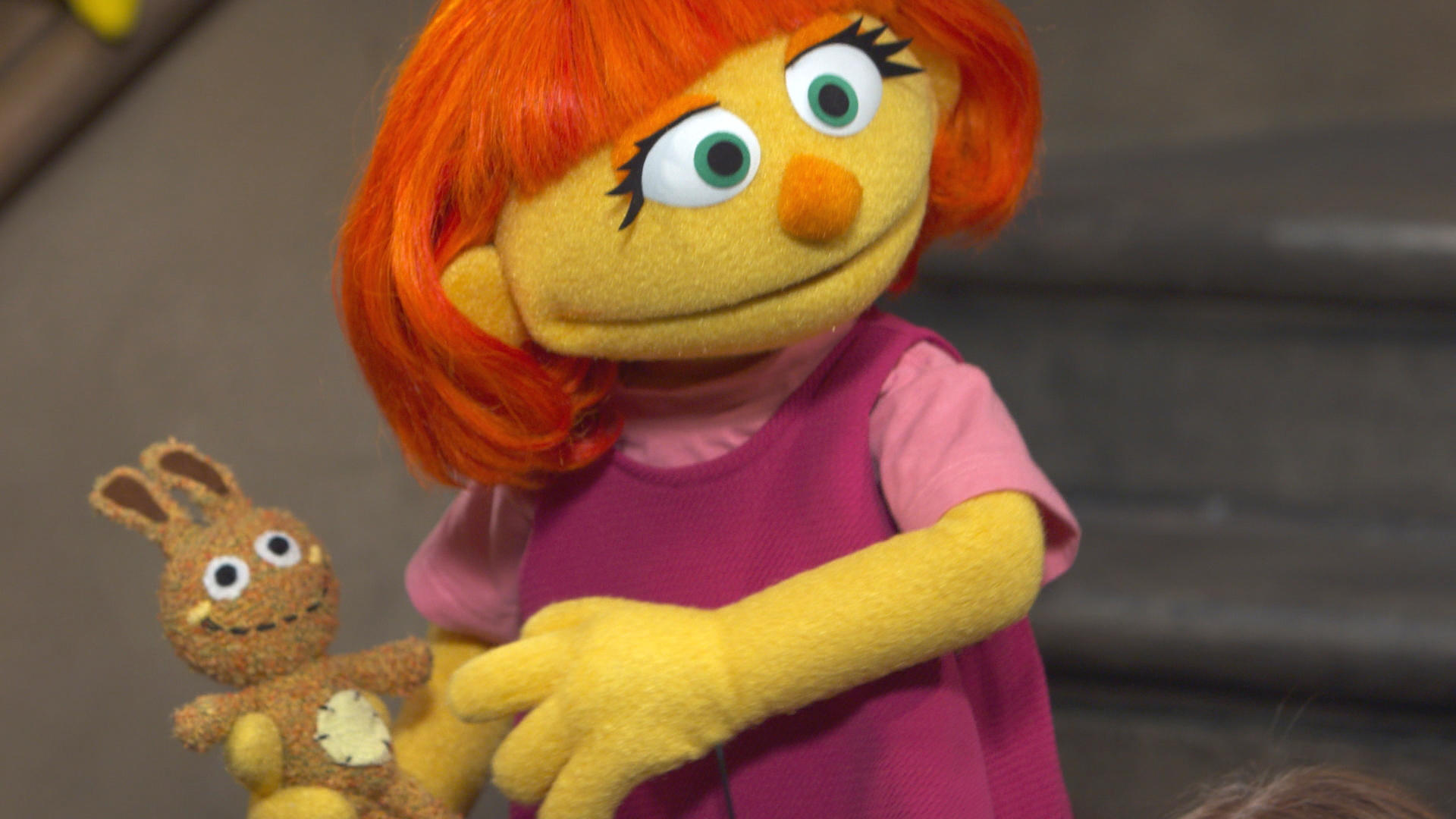 The following is a script from “New Kid on the Street,” which aired on March 19, 2017. Lesley Stahl is the correspondent. Shari Finkelstein, producer. Nieves Zuberbuhler, associate producer.

There are not many shows on television that deserve to be called true American institutions – but one of them is surely “Sesame Street.” It’s been on the air now for almost 50 years.  When Sesame Street began in 1969, it was considered an experiment.  The question: Could television be used to educate young children? Well, research proved the answer to be yes, and the nonprofit children’s television workshop -- now called Sesame Workshop -- that created the show, has been refining and expanding that mission ever since, everything from ABC’s and 123’s, to race, and even death. In a few weeks, Sesame Street -- which now airs on HBO as well as its longtime home on PBS -- will take on its latest challenge: introducing a new kid on the street. A Muppet named Julia, who has autism.

For many of us, these opening notes are a trip down memory lane.

To a street we watched as kids, with our kids, or both.

Bert: Hey Ernie, do you know that you, uh, have a banana in your ear?

Ernie: What was that, Bert?

With Muppet characters as known and beloved as any human TV star.

Bert: Will you just take that banana out of your ear?!

Ernie: I’m sorry you’ll have to speak a little louder, Bert. I can’t hear you.  I have a banana in my ear!

Today, almost half a century later, “Sesame Street” is shot on a soundstage in Astoria, Queens, with one of the cameramen who filmed the first episode still on the job.  The “Sesame Street” set is a vibrant, upbeat place, with puppeteers on rolling stools down below, and the furry and feathery creatures they bring to life in the sometimes crowded space above.

Abby: It was a little awkward.  Whaaaaaa!  [gets knocked over by Big Bird’s tail]

The puppeteers figure out how to position their Muppet by watching the scene on monitors.

The day we visited, they were filming the debut of the new Muppet character, Julia, who has autism. The story begins with Julia’s friends, Muppets Elmo and Abby Cadabby, introducing her to Big Bird.

But Big Bird is confused when Julia doesn’t respond.

“I would love her to be not Julia, the kid on ‘Sesame Street’ who has autism. I would like her to be just Julia.” Christine Ferraro, writer

Christine Ferraro: I think the big discussion right at the start was, “How do we do this? How do we talk about autism?”

Christine Ferraro has been a writer at Sesame Street for 25 years, during which time the frequency of autism diagnoses has multiplied.

Lesley Stahl: The chances of a little kid two, three, four years old having some kind of a relationship with another kid with autism is pretty high.

Christine Ferraro: Exactly. Especially once they hit school age, because they’ll be in their classrooms.

But how to portray autism?

“Sesame Street” has always based its characters and content on extensive research.  They regularly bring in educators and child psychologists. In the case of Julia, they also worked with autism organizations to decide which characteristics she should have and how best to normalize autism for all children.

Christine Ferraro: So that when they encounter them in their real life it’s familiar. And they see that these-- these can be their friends too.

Lesley Stahl: Well so do you.

During a break in the filming, Julia and her friends did for us what they’re hoping to do for millions with this episode…

…help the audience understand when a child with autism doesn’t react the way one might expect.

Lesley Stahl: --she didn’t answer you either.

Big Bird: Yeah that’s right. And I thought that maybe she didn’t like me.

Elmo: Yeah, but you know, we had to explain to Big Bird that Julia likes Big Bird. It’s just that Julia has autism. So sometimes it takes her a little longer to do things.

Lesley Stahl: You’re explaining her, ‘cause you’ve come to understand her so well.

Elmo: Well-- we’re pretty good at understanding people. We live with a grouch.

Oscar: What do you want?

“Sesame Street” has been around so long now that it’s hard to remember a time before children’s television was educational.  But Sesame Street’s creator Joan Ganz Cooney remembers it well.

Joan Ganz Cooney: It was just nutty cartoons with no purpose at all. I mean, I would watch them and just be appalled.

Lesley Stahl: As you’re talking, I’m seeing a cat slam against a wall, be reduced to nothing, slide down, and come back to life.

Ganz cooney, then a public television producer, was asked by the Carnegie Corporation to study whether television could be something different.

Joan Ganz Cooney: The question being, “Do you think television could teach children?”

Ironically, she says the answer was right in front of her and everyone else, in beer.

Joan Ganz Cooney: They were singing beer commercials, children were. Well, so obviously, they had learned—

Joan Ganz Cooney: So if a commercial could teach beer, couldn’t it teach one-- one, two, three, four, five, six, seven, eight, nine, 10?

Joan Ganz Cooney: And we did. We created little commercials.

The new show had a particular target: low-income children who were arriving at school less prepared than their middle-class peers.  So Ganz Cooney deliberately made the set a gritty New York street urban kids could relate to, with an interracial cast that got the show banned early on in Mississippi.  Nationwide, though, it was a hit.  Kids -- and parents -- loved Jim Henson’s Muppets.

And testing showed kids who watched were learning. Sometimes the lessons were about real life, as when the actor who played beloved shopkeeper Mr. Hooper passed away, and the show decided to address the subject of death head on.

Adults: Oh, look at that.

Lesley Stahl: You could have changed actors.

Joan Ganz Cooney: Yes. But we decided “Sesame Street” had always dealt with the real. And it was real, and so we decided not to just replace him and call the man Mr. Hooper and hope they didn’t notice.

Big Bird: Oh yeah, I remember. I’ll give it to him when he comes back.

Susan: Big Bird, when, when people die, they don’t come back.

Over the years, “Sesame Street” did segments about other challenging subjects, like skin color, disabilities, and prejudice.

Gulliver: In my neighborhood, birds only play with birds, so I’m not playing with a Snuffleupagus.

Snuffy: Ohhh, that hurts my feelings.

Less well known is a branch of Sesame, separate from the TV show, that creates online videos like this and other materials. They’re called social impact initiatives and they’re targeted at specific communities of kids.

Elmo (w/ kid and dad with prosthetic hand): It’s like a robot hand.

And the nearly three million kids with a parent incarcerated.

Muppet: My dad’s in jail.

The focus on autism began as one of these social impact projects -- with videos.

“It means that our kids are important enough to be seen in society. Having Julia on the show and seeing all of the characters treat her with compassion...it’s huge.” Stacey Gordon, puppeteer

And an online animated storybook about a little girl named Julia. The initiative was so well-received, sesame decided to bring Julia to the broadcast, which meant designing a new Muppet.

Rollie Krewson: This is our eye drawer.

Lesley Stahl: Look at that, my goodness.

This is where Muppets are born, at the Jim Henson workshop, at the work station of master puppet creator Rollie Krewson.

Rollie Krewson: The male eyes have no eyelashes. And the female eye have eyelashes.

Lesley Stahl: Because Julia has autism, were there special challenges in building her?

Rollie Krewson: Yes actually, because when she gets upset, she flaps her hands. So she has two separate sets of arms. She has a set of arms that does this. (ARMS FLAP) And then she has a set of arms when she’s fine and OK. So they would switch on set.

And of course every Muppet needs a puppeteer.  But not every puppeteer has the connection Stacey Gordon does to the role. Gordon is the mother of a son with autism.  She traveled all the way from Phoenix to audition for the part.

Lesley Stahl: The idea that there will be a child with autism on Sesame Street—

Lesley Stahl: Tell me what that means to you.

Stacey Gordon: It means that our kids are important enough to be seen in society. Having Julia on the show and seeing all of the characters treat her with compassion—

Gordon told us she channeled her own son’s experiences for a tough scene where Julia’s heightened sensitivity to noise triggers a meltdown.

Alan: The sirens are bothering you?

Stacey Gordon: It’s important for kids without autism to see what autism can look like.

Stacey Gordon: Had my son’s friends been exposed to his behaviors through something that they had seen on TV before they experienced them in the classroom, they might not have been frightened. They might not have been worried when he cried. They would have known that he plays in a different way and that that’s OK.

Lesley Stahl: He didn’t have that.

Stacey Gordon: --have that.

Lesley Stahl: --kids from now on will.

Also beautiful to Gordon, the message of inclusion at the heart of one of the episode’s most memorable scenes.

Christine Ferraro: They decide to play tag together. But Julia’s so excited that she’s jumping up and down. That’s a thing that can be typical of some kids with autism.

Christine Ferraro: And then it turns into a game where they’re all jumping like her. So it was a very easy way to show that with a very slight accommodation they can meet her where she is.

And get something out of it themselves.

Elmo: This is fun, Julia.

Big Bird: You know, I think I’d like to be a friend of Julia too.

Lesley Stahl: She is going to be a recurring character?

Lesley Stahl: And will she become a major character?

Lesley Stahl: You’d like to have her become a major character, I can see.

Elmo: Yeah, we really like Julia.  She’s really special to us, Miss Lesley.

Lesley Stahl: Julia, are you having fun with your new friends?