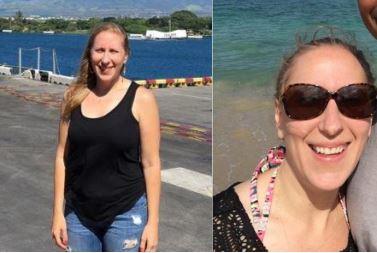 Police in the city of Ontario say Friday that they found the remains of Julia Jacobson and her dog in a shallow grave.

Investigators say her remains were found after a tip from her ex-husband, Dalen Ware, of Phoenix. He was arrested in October on suspicion of murder in connection with her death.

Investigators have not disclosed a motive for the killing.

A forensic analysis of her car and other evidence soon convinced detectives that she had been murdered, Ontario police Detective Melissa Ramirez told CBS affiliate KFMB. Officials have declined to reveal the nature of those findings.

This week, based at least in part on information provided by Jacobson's suspected killer, more than 120 police personnel from Ontario, San Bernardino, San Diego and Riverside began scouring a six-square-mile expanse of rugged open territory south of I-10.

A cadaver dog alerted a deputy to the gravesite about 10:30 a.m., said Cpl. Fred Alvarez of the Ontario Police Department.

The 37-year-old was an Army veteran who had served two tours in Iraq. Jacobson filed for divorce from Ware in 2016 citing "irreconcilable differences," according to the newspaper, according to CBS Los Angeles.