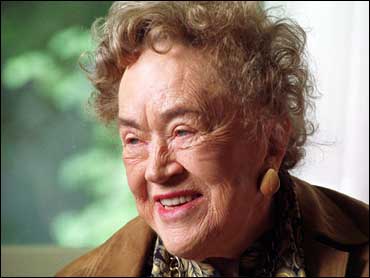 Before Julia Child became known to the world as a leading chef, she admitted at least one failing when applying for a job as a spy: impulsiveness.

At 28 as an advertising manager at a furniture store, Child clashed with new store managers and left her job abruptly.

"I made a tactical error and was out," she explained in a handwritten note attached to her application to join the Office of Strategic Services, a World War II-era spy agency. "However, I learned a lot about advertising and wish I had been older and more experienced so that I could have handled the situation, as it was a most interesting position."

Child was not yet married and was applying for the job under her maiden name, McWilliams, according to previously top-secret records released by the National Archives on Thursday. She was hired in the summer of 1942 for clerical work with the intelligence agency and later worked directly for OSS Director William Donovan, the personnel records show.

Details about Child's background and nearly 24,000 other OSS employees are revealed in the newly released documents, withheld from public view as classified records for decades by the CIA.

Other notables identified in the files include John Hemingway, son of author Ernest Hemingway; Kermit Roosevelt, son of President Theodore Roosevelt; and Miles Copeland, father of Stewart Copeland, drummer for the band The Police.

Some of those like Child on the list have been identified previously as having worked for the OSS, but their personnel records never have been available before. Those records would show why they were hired, jobs they were assigned to and perhaps even missions they pursued while working for the agency.

The release of the OSS personnel files unmasks one of the last secrets from the short-lived wartime intelligence agency, which for the most part was later folded into the CIA after President Truman disbanded it in 1945.

"I think it's terrific," said Elizabeth McIntosh, 93, a former OSS agent. "They've finally, after all these years, they've gotten the names out. All of these people had been told never to mention they were with the OSS."

The CIA long resisted releasing the records. But a former CIA director, William Casey, himself an OSS veteran, cleared the way for transfer of millions of OSS documents to the National Archives when he took over the spy agency in 1981. The personnel files are the latest documents to be made public.

Information about OSS involvement was so guarded that relatives often could not confirm a family member's work with the group.

Walter Mess, who handled covert OSS operations in Poland and North Africa, said he kept quiet for more than 50 years, only recently telling his wife of 62 years about his OSS activity.

The files provide new information even for those most familiar with the agency. Charles Pinck, president of the OSS Society created by former OSS agents and their relatives, said the nearly 24,000 employees included in the archives far exceed previous estimates of 13,000.

The newly released documents will clarify these and other issues, said William Cunliffe, an archivist who has worked extensively with the OSS records at the National Archives.

"We're saying the OSS was a lot bigger than they were saying," he said.