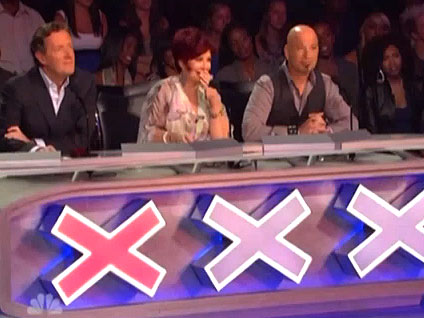 NEW YORK (CBS) British juggler Nick Pike maybe should call himself a magician after reappearing on Tuesday night's episode of "America's Got Talent."

The daredevil surprised many by appearing on the NBC show with no explanation, just days after being told on national television that he wasn't going to Hollywood for the quarter-finals. Pike is now officially back on NBC's list of 48 quarter-finalists.

This surprise was cleared up once it was revealed that sword swallower and nail banger Twisted Trystan and Krystan withdrew from the competition. The judges had asked Pike to replace them.

Twelve of the 48 quarter-finalists performed last night - the first live show of the season - and only four will advance to the semi-finals, based on the public's votes. Acts included Kung Fu Heroes; Airpocalypse; The Hot Shot Tap Dancers; Future Funk; and glow-in-the-dark crowd favorites Fighting Gravity.

Four acts will advance to the semi-finals on Wednesday night's episode on NBC. Live performances by Selena Gomez and the Scene and Rock of Ages will air.