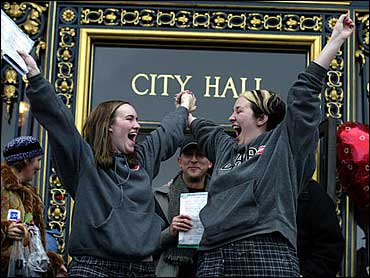 The judges took part in separate hearings Tuesday. The second judge told the two conservative groups that they would likely succeed on the merits eventually, but that for now, he couldn't accept their proposed court order because of a punctuation error.

It all came down to a semicolon, the judge said.

"I am not trying to be petty here, but it is a big deal. ... That semicolon is a big deal," said San Francisco Superior Court Judge James Warren.

The Proposition 22 Legal Defense and Education Fund had asked the judge to issue an order commanding the city to "cease and desist issuing marriage licenses to and/or solemnizing marriages of same-sex couples; to show cause before this court."

"The way you've written this it has a semicolon where it should have the word 'or,'" the judge told them. "I don't have the authority to issue it under these circumstances."

Until they write their proposed court order correctly, Warren indicated he would not order an immediate halt to the marriages of gays and lesbians that continued throughout the day across the street at City Hall.

Lawyers for both sides then spent hours arguing about punctuation and court procedures; the hearing was continued into late Tuesday afternoon.

Gay couples from as far as Europe have been lining up outside City Hall since Thursday, when city officials decided to begin marrying same-sex couples in a collective act of official civil disobedience.

Also Tuesday, San Francisco County Superior Court Judge Ronald Quidachay said he was not prepared to rule until at least Friday in a separate challenge of the marriages.

Mayor Gavin Newsom has said the city will keep marrying gays until the courts order a halt, and then the city will pursue a constitutional challenge through the courts. Newsom says the equal protection clause of the California Constitution makes denying marriage licenses to gay couples illegal.

The conservatives want the courts to nullify the marriages and block the city from granting any more of the "gender-neutral" licenses.

Newsom's decision to permit gay marriages, while still legally unsettled, has intensified the national debate over whether same-sex couples should be allowed to marry and enjoy the many benefits only married couples receive.

"That ruling was a profound affirmation that same-sex couples are entitled to the protections of our Constitution," John Davidson of Lambda Legal Defense Fund told CBS News Correspondent Vince Gonzales.

Quidachay told lawyers for the Campaign for California Families that they had not given the city enough notice to obtain an emergency injunction. "The court itself is not prepared to hear the matter," the judge said.

The conservative group said state law explicitly defines marriage as "a personal relation arising out of a civil contract between a man and a woman." The group also argues that San Francisco is violating a ballot measure approved by California voters in 2000 that said only marriages between a man and woman are valid.

"If the mayor can't read the law, we're hoping a judge can read it for him," said Randy Thomasson, the group's president.

Whatever the outcome of Tuesday's court hearings, the final word is expected to come later from the California Supreme Court, as both sides have promised to appeal.

The Massachusetts Supreme Judicial Court in November ruled that the state's constitution permits gay marriages. Lawmakers there are debating a constitutional amendment to ban same-sex marriages.

In Virginia, gay rights proponents scored victories in the conservative-leaning House of Delegates on measures involving access to health insurance and home loans.

The House, which last week passed a bill reaffirming the state's ban on gay marriage, narrowly passed legislation Monday that would allow employers to offer group insurance benefits to gay partners who live together. It rejected a measure seeking to make state mortgage loans available only to married heterosexuals or blood relatives.