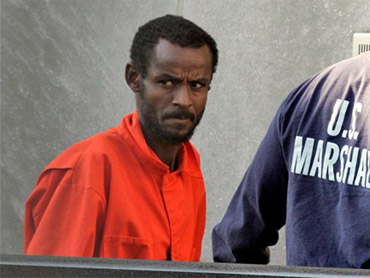 A judge on Tuesday dismissed piracy charges against six Somali nationals accused of attacking a Navy ship off the coast of Africa, concluding the U.S. government failed to make the case their alleged actions amounted to piracy.

The dismissal of the piracy count by U.S. District Judge Raymond A. Jackson tosses the most serious charge against the men, but leaves intact seven other charges related to the alleged April 10 attack on the USS Ashland in the Gulf of Aden. A piracy conviction carries a mandatory life term.

"The court finds that the government has failed to establish that any unauthorized acts of violence or aggression committed on the high seas constitutes piracy as defined by the law of nations," Jackson wrote in granting the defense motion to dismiss.

Attorneys for the six men had argued that the men did not seize or rob the Ashland, falling short of the centuries-old definition of piracy.

Jackson, who issued the ruling from Norfolk, wrote that the government was attempting to use "an enormously broad standard under a novel construction of the statute" that would contradict a nearly 200-year-old Supreme Court decision.

The six allegedly attacked the Ashland in a skiff, which was destroyed by 25mm fire from the Ashland. The men claimed they were ferrying refugees.

Attorneys for five other Somali defendants accused in a similar attack on the USS Nicholas are also seeking dismissal of the piracy count, citing similar arguments. They are being tried before a different judge.

The government did not immediately respond to an Associated Press request for comment.