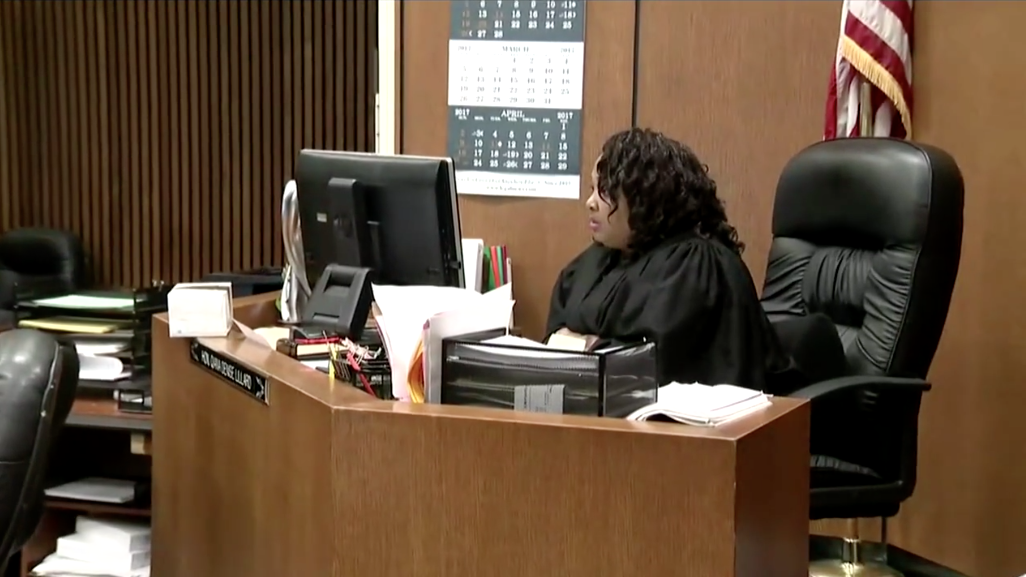 Judge Qiana Lillard’s no-nonsense approach is getting attention far beyond her Michigan courtroom. The Wayne County Circuit Court judge kicked two people out of the room for laughing during a deadly DUI sentencing on Friday.

When Lillard heard giggles from the family of Amanda Kosal, 25, who, according to NBC affiliate WDIV in Michigan admitted she was drunk when she struck an SUV head-on, killing 31-year-old Jerome Zirker and severely injuring his fiancée, 31-year-old Brittany Johnson, this past summer, she couldn’t just sit back and listen.

Instead, the judge paused the victim’s family as they read impact statements to scold the man and woman involved.

“Whoever can sit here at a tragic moment like this and laugh and smile when somebody has lost a family member ... in the entire time that Mr. Zirker’s sister was speaking, that clown -- and that’s what I am going to call him, a clown -- was sitting there smiling and laughing,” said Lillard.

“And you can go, too,” the judge added, pointing to Kosal’s mother, Donna. “Because if you don’t know how to act, you can go to jail. So leave.”

Lillard continued to lecture the courtroom, and told others who dared to “laugh and smirk” they could join the woman in jail.

“This is a court of law, and these are very serious matters,” she explained to Kosal’s family. “I understand you all are very upset because your loved one is going to prison -- but guess what? She’s going to prison for the choices that she made. These people are here grieving, saddened because a senseless act took away their loved one, and you’re sitting here acting like it’s a joke?”

“Not in Courtroom 502. Not today and not any other day,” the judge declared.

A video of the proceedings showed a court officer escort Kosal’s mother from the room as the judge announced she would be taken into custody for criminal contempt.

“Your disruptive and disrespectful behavior disrupted today’s proceedings and you, ma’am, are going to the Wayne County Jail for 93 days,” said Lillard, as the woman whispered something back under her breath.

Amanda Kosal was sentenced to 3 to 15 years in prison for the deadly drunk driving crash that killed Zirker, a father of five, reports WDIV. Her mother, Donna, appeared back in court Friday in front of Lillard. She apologized and her sentence was reportedly reduced to one day in jail, time served.

On Saturday, Lillard took to Facebook to thank the millions of people who watched a video of the court proceedings, and those who reached out to her personally.

“Thank you to everyone who has taken the time to visit this page to express your feelings,” she wrote. “I am honored to have the privilege of serving the citizens of Wayne County.”