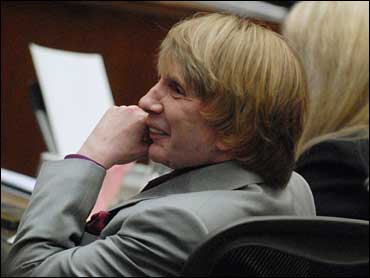 The judge in Phil Spector's murder trial threatened Thursday to hold a former attorney for the record producer in contempt if she refuses to testify about possible evidence that was never given to prosecutors.

In a hearing without the jury present, Superior Court Judge Larry Paul Fidler said he wanted to avoid holding Sara Caplan in contempt but saw no other choice. He deferred the issue until Monday and ordered the trial to resume with other witnesses.

Spector, 67, is accused of shooting actress Lana Clarkson in the mouth at his suburban mansion on Feb. 3, 2003. He claims she shot herself.

Caplan, a member of Spector's original defense team, testified in an earlier hearing without the jury present that she saw famed forensic expert Henry Lee pick up a small white object when the team inspected the death scene after sheriff's investigators were through with it.

Lee has denied in court that he ever had such an item, but the judge has found that Lee did remove something from the scene.

If Lee testifies for the defense, the prosecution would want to call Caplan to impeach his credibility. Prosecutors say the object could be a missing fingernail from Clarkson.

Fidler said the jury was entitled to know there might be a piece of evidence that was never provided to the prosecution.

"It could have been of great value. Now we will never know," he said. "The people have been prevented from putting on their entire case. The jury is entitled to know that."

A distraught Caplan claimed in court Thursday that prosecutors had misquoted her testimony.

"I don't know what I saw. I don't know that it was removed from the premises. I don't remember where it was," she said.

"Ms. Caplan has clearly testified she observed Dr. Lee put something in a vial. It was white, hard, with rough edges. You cannot reconcile Dr. Lee's testimony and Ms. Caplan's testimony," the judge said.

The body of Clarkson, 40, star of the movie "Barbarian Queen," was found slumped in a chair in a foyer.

Spector rose to fame in the 1960s with a revolutionary recording technique known as the "Wall of Sound."