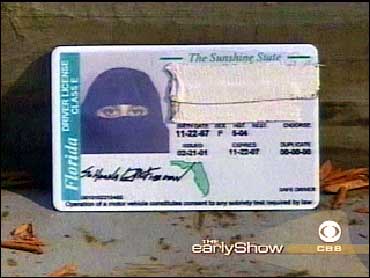 A Florida judge ruled Friday that a Muslim woman cannot wear a veil in her driver's license photo.

Prosecutors had argued that allowing people to cover all but their eyes in their ID pictures could allow potential terrorists to hide their identities.

After hearing three days of testimony last week, Circuit Judge Janet C. Thorpe ruled that the state has a compelling interest in protecting the public, and that having photo identification was essential to that interest.

Thorpe also said Sultaana Freeman's right to free exercise of religion would not be infringed by having to show her face on her license.

Freeman, 35, had obtained a license that showed her veiled with only her eyes visible through a slit. But the state revoked the license in 2001 when she refused to have her photo retaken with her face uncovered, a demand made after the Sept. 11 terrorist attacks.

Freeman sued the state of Florida, saying it would violate her Islamic beliefs to show her face publicly.

Assistant Attorney General Jason Vail argued that Islamic law has exceptions that allow women to expose their faces if it serves a public good, and that arrangements could be made to have Freeman photographed with only women present to allay her concerns about modesty.

CBSNews.com Legal Analyst Andrew Cohen says the judge had to balance some fairly serious competing interests in this case.

"In the end she decided that the plaintiff's religious rights would not be so burdened by taking a license photo without a veil that they warranted ignoring Florida's interest in being able to effectively identify people through their drivers' licenses," says Cohen.

He says there's almost certain to be an appeal in the case.