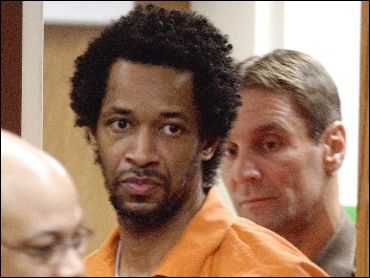 A judge Monday rejected a defense request seeking dismissal of one of the indictments against sniper suspect John Allen Muhammad based on claims that the state's new anti-terrorism capital murder law is too vague.

"I believe it does provide a person of ordinary intelligence notice of the type of offense that may be prosecuted…I think the statute is in fact constitutional," Circuit Judge LeRoy F. Millette Jr. said.

Peter Greenspun, one of Muhammad's lawyers, argued that the law was designed for terrorists like Osama bin Laden. "The prosecution is trying to put a square peg into a round hole. They're trying to find what can best be described as a crime spree, as serious as it was, into a terrorism statute," Greenspun said.

Greenspun also argued that the law is written so vaguely that any crime that produces fear in a community could be prosecuted as terrorism.

Prosecutor Richard Conway countered that the "court must presume that a legislative act is constitutional" unless it finds severe problems with the law.

In another development, Muhammad's lawyers at least temporarily dropped a request to allow a judge, rather than a jury, to decide the case. They said they may submit the request in a different form later.
Prosecutor Paul Ebert said that he would be inclined to allow a bench trial if Muhammad properly waives his right to a jury trial.

On the third and final issue raised Monday, Millette took under advisement a defense request for a change of venue.

Muhammad and Lee Boyd Malvo have been linked to 20 shootings, including 13 deaths, in Virginia, Maryland, Georgia, Alabama, Louisiana and the District of Columbia.

Muhammad, 42, is charged with capital murder in the Oct. 9 slaying of Dean H. Meyers, 53, outside a gas station just north of Manassas.

Muhammad's attorneys earlier asked Millette to preclude a jury trial. They claimed that finding an impartial jury will be impossible because of extensive news coverage of the sniper attacks.

Prosecutors argued that a fair jury can be found in Prince William County and that there is no evidence that people will not be able to set aside any opinions they formed based on media coverage of the case.

The defense had claimed that everyone in northern Virginia was victimized by the sniper shootings in October, but prosecutors said not everyone in the area was a true "victim" of the attacks by legal standards. Only people directly injured in the series of shootings and people who suffered "personal emotional injury" should be barred from serving on the jury, they said.

In Fairfax County, Circuit Court Judge Jane Marum Roush is considering a defense motion to move the trial of Malvo, Muhammad's alleged co-conspirator. Attorneys for Malvo, 18, also argue there is no way to seat a jury because of pretrial news coverage and because the entire community was gripped by fear.

Malvo is facing trial first in Fairfax for the Oct. 14 shooting death of Linda Franklin, 47.