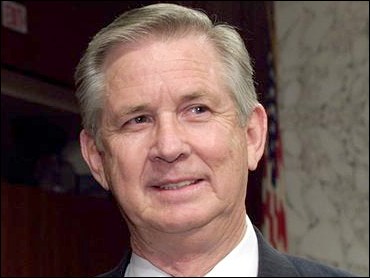 Judge Charles Pickering says accusations that he is racially insensitive fly in the face of his decades-old record of fighting for civil rights.

Pickering, whose nomination by President Bush to the 5th Circuit Court of Appeals was voted down by Democrats in the U.S. Senate because of those charges, talked about his record with Mike Wallace on 60 Minutes .

A conservative Republican, Pickering is now serving on the appeals court temporarily, filling a vacant seatto which President Bush appointed him while Congress was not in session. When his appointment runs out next year, he will have to face the accusations once again in a Senate confirmation hearing.

Judge Pickering felt so strongly that he'd been smeared - and that he is not racially insensitive - he agreed to speak to 60 Minutes on camera, which federal judges almost never do.

Says Pickering, "To accuse a white southerner of being a racist is about the worst thing you can do. And this has been my life work. I have worked for more than three decades trying to provide better relations between the races, trying to protect equal rights. That's my core being. And they've attacked that."

It cuts to his core, Pickering told us, because for 40 years, he says he has worked hard to remove racial barriers in Mississippi.

Mike Wallace: You grew up in the south?

Mike Wallace: Segregation was a way of life?

Charles Pickering: We lived in a segregated society in the 1950s and the 1960s.

Mike Wallace: And how did you begin to evolve from the background into which you were born?

Charles Pickering: Well, I was elected county attorney in 1963 at the age of 26. And when I began to see the violence and the hatred that comes from unrestrained racial prejudice, I saw the violence of the Klan, I had three choices. I could either do as most Mississippians did and simply remain silent. I could become a Klan sympathizer. Or I could challenge the Klan and take the Klan on. And I came to the conclusion that the right thing to do was to challenge the Klan and I did that.

Mike Wallace: And how do you challenge the Klan?

Charles Pickering: I worked with the FBI to stop Klan violence.

Pickering told 60 Minutes he and the FBI exchanged information about Klan shootings and bombings. Back in 1966, after civil rights activist Vernon Damer was killed by a firebomb, and notorious Klan leader Sam Bowers was charged with the murder, Pickering, then prosecutor in a nearby county, testified that Bowers had a reputation for violence.

Bowers was described as the most vicious Klansman ever to don a white robe.

Mike Wallace: And after you testified against Bowers, you needed FBI protection?

Charles Pickering: The FBI came to see me and told me that I needed to watch when I stepped out of my office at night, that the Klan was threatening to whip me. Did have an undercover agent who was working with the Klan that used to come by my home after he had been to Klan meetings to make sure that some of the crazies, after they'd been worked into a frenzy with the burning cross and under their white sheets, that they were not there to burn our house. We were careful and tried to use older baby sitters. We tried not to leave our children with teenage baby sitters during this period of time."

In Pickering's next election (for the state legislature), the Klan took credit for defeating him. It took four decades to finally convict Bowers, who's now serving life in prison for murder.

Back in the '70s, when public schools were forced to integrate, many white parents took their children out of the public schools and put them in private schools for whites only. But not the Pickerings.

"We sent our children to the integrated schools, even though there was a good private school less than a block from our home," says Pickering. "We supported integrated public education. And did so with our children. We have a picture of our middle daughter. She's in with her class, which is predominantly black."

"When I was chairman of the Mississippi Republican party in 1976, I sought invitations and accepted invitations to speak to the state NAACP, that I do not think we need to be polarized along race," Pickering continues. "In 1981, I accepted employment in a case to defend a young black man who was charged with robbing a young white girl at knifepoint. And it was not a popular case for me to take on. But I thought he was innocent and that he needed a defense. I didn't think he would have gotten a good attorney otherwise. He was acquitted."

Nonetheless, Senate Democrats who questioned Pickering in committee portrayed him as soft on cross burners, after they learned he'd gone to great lengths to cut back the sentence of a young white man convicted of cross burning.

Sen. Charles Schumer of New York was especially critical: "The bottom line is if Judge Pickering were so sensitive to the long and sad racial history in Mississippi, he would never have done what he did with the case of cross burning."

Here's what the senator's talking about: 10 years ago, three young white men were arrested for burning a cross on the lawn of an interracial couple. Two of the three defendants pleaded guilty to avoid going to jail. Prosecutors initially thought – wrongly -- that the third defendant, Daniel Swan, had been the ringleader, so they offered him the worst plea deal, which would have required 18 months in prison. He turned it down, and he went to trial.

Says Pickering, "He didn't feel like it was right for the others not to have any jail time and for him to go to the penitentiary. And the jury convicted him…of a hate crime… And then the government came back and recommended 7-1/2 years sentence, which I thought was a bad case of disproportionate sentencing. No proportionality."

Mike Wallace: In other words, that the other two guys, the young people, got no jail time.

Charles Pickering: They were arguing for 7-1/2 years.

Pickering said this was the worst case of disproportionate sentencing he'd ever seen, especially since the real ringleader (who didn't go to prison) had attacked the same house before.

So Judge Pickering, instead of following federal sentencing guidelines of five years in prison, put strong pressure on prosecutors to drop part of Swan's hate-crime conviction. The prosecutors finally gave in and the judge sentenced Swan to 2 1/2 years in prison.

"And when I came to sentence him," recalls Pickering, "I told him that what he did was a heinous, reprehensible, despicable, dastardly act. And that he was going to the penitentiary for it. There wasn't any question about that. And that we had to learn to live, to get along with one another. And if anyone will read the transcript of where I sentenced him, there's no way that an objective person will come with any view that I was soft on a cross burner or that I had sympathy for a cross burner."

Sen. Schumer: We didn't mandate that a judge call someone who does this names. We mandated five years in jail.

Mike Wallace: The fact that he felt that Swan was not as culpable as the others?

Sen. Schumer: The jury felt he committed this crime. The Congress said this crime demands five years. And Judge Pickering took it on himself, the one time he had a crusade, to help a man who burnt a cross.

Wallace pointed out to Pickering that one of the victims of the cross burning, Brenda Polkey, wrote to Sen. Leahy: "My family suffered horribly as a result of the cross-burning. I'm astonished that the judge would have gone to such lengths to thwart the judgment of the jury and to reduce the sentence of a person who caused so much harm to me and my family."

Pickering's response to Wallace: "You know, no person should have to go through what Ms. Polkey went through. I have the greatest empathy for her and her situation. I attempted to do justice as best I could. And I think I did that."

President Bush himself has said, "Pickering has got a very strong record on civil rights. Just ask the people he lives with."

60 Minutes did, and found that in Mississippi, Pickering enjoys strong support from the many blacks who know him. In his hometown of Laurel, four of the five black City Council members say they back him, because of all he's done to improve race relations. And many black attorneys who practice before him say Pickering is fair and first-rate. They include attorney Charles Lawrence, who says, "I trust him because I've been in front of him. I've had cases in front of him. And that's not to say I've always won. I haven't always won. But he, he has an understanding of the law and he applies it he applies it fairly across the board.

Deborah Gambrell, another black attorney, and another Democrat, thinks Pickering got a raw deal from those Democrats in Washington.

"This man makes for a level playing field," she says of Pickering, "and that's the thing that I admire about him."

What was her reaction when Democratic senators labeled Pickering "insensitive on racial issues"?

Several past presidents of the NAACP in Mississippi support Pickering. But today's NAACP leaders do not. Some feel the seat should go to a black judge. The national NAACP issued a statement, calling Pickering hostile to its priorities, and all its branches in Mississippi oppose the judge.

But when Clarence McGee, who heads the NAACP in Hattiesburg, sat down for 60 Minutes with a Pickering supporter, Charles Evers, brother of murdered civil rights leader Medgar Evers, the NAACP president got an earful:

Charles Evers: You know, maybe you don't know, you know that Charles Pickering is a man helped us to break the Ku Klux Klan. Did you know that?

Clarence McGee: I heard that statement made.

Charles Evers: I mean, I know that. Do you know that?

Clarence McGee: I don't know that.

Charles Evers: So Charles Pickering took the case. Came to trial and won the case and the young man became free.

Clarence McGee: I don't know about that.

Charles Evers: But did you also know that Charles Pickering is the man who helped integrate his churches. You know about that?

Then McGee brought up the cross burning case and the strong pressure Pickering put on prosecutors to cut back Daniel Swan's sentence. Says McGee, "I would say he overstepped his bounds. He might be somewhat intimidating. These kinds of things disturb me."

But Pickering remains proud of his record, and of his state, for working to heal historic racial wounds.