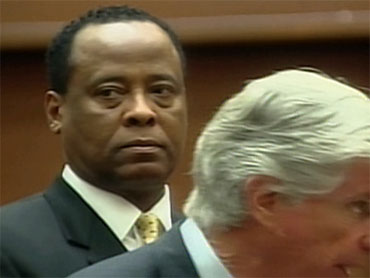 LOS ANGELES (AP) A judge on Tuesday ordered the personal physician of Michael Jackson to stand trial for involuntary manslaughter after hearing testimony that he administered a lethal dose of a powerful anesthetic and other sedatives then left the pop star alone.

The ruling in the case against Houston cardiologist Dr. Conrad Murray came after a six-day preliminary hearing before Superior Court Judge Michael Pastor.

Prosecutors concluded their case with testimony from two doctors who said Murray acted outside the standard of medical care when he administered the anesthetic propofol and failed to provide proper care.

Both witnesses said that even if Jackson had self-administered the final dose of the drug, his death would be a homicide because of Murray's actions.

"I'm happy so far," LaToya Jackson said while walking to her car. Randy Jackson thanked prosecutors while flashing a peace sign outside the courtroom.

Murray, 57, has pleaded not guilty, and his attorneys have said he did not give Jackson anything that should have killed him. Murray could face up to four years in prison if convicted.

Pastor also granted a request by the California Medical Board to suspend the Murray's license to practice medicine in the state. Pastor said he made the decision in the interest of public safety and ordered Murray to notify every district in which he practices of the decision within 24 hours. Murray has clinics in Houston and Las Vegas.

During closing arguments at the preliminary hearing, another defense attorney, Joseph Low IV, argued the case should be dismissed because prosecutors didn't adequately prove how Murray caused Jackson's death. He also said Jackson's health may have been a contributing cause.

"In contrast to Mr. Low's comment, let me just say, it was not Michael Jackson's time to go," Deputy District Attorney David Walgren said. "Because of Dr. Murray's actions, Michael's children are left without a father."

One of the final witnesses Tuesday was Dr. Christopher Rogers, chief of forensic medicine for the Los Angeles County coroner.

During his cross-examination, defense attorney J. Michael Flanagan suggested Jackson could have swallowed propofol, which is meant to be administered intravenously.

While Rogers said that seemed unlikely, he said it would not have made a difference in his finding of homicide because of inadequate care by Murray.

Flanagan's inquiry was the first indication of how his lawyers might defend Murray at trial. Flanagan has suggested Jackson could have injected himself intravenously while Murray was out of the room.

Rogers, however, testified that propofol should not have been present in the bedroom because it was meant only for hospital settings and, "If there was propofol there, the doctor should have been prepared for the effects."

Rogers also said Jackson had a strong heart and was mostly healthy.

"The care was substandard," Rogers said. "There were several actions that should have been taken."

Rogers also testified that Murray was improperly using propofol to treat the musician for insomnia, and that Murray was wrong to leave Jackson's side while he was under anesthesia before he died.

Another witness. Dr. Richard Ruffalo, an anesthesiologist and clinical pharmacologist, gave the judge an exhaustive rundown on the sophisticated medical equipment that should have been present when Murray administered propofol in Jackson's bedroom.

Among the devices were monitoring equipment for heart and lungs and resuscitation equipment.

"You need to know what you're doing with the expectation your patient will wake up quickly," Ruffalo said. "Even if you're using propofol for a short time, it can do a lot of unfortunate things, especially if mixed with other drugs."

Prosecutors used testimony and phone records to create a timeline during the hearing of Jackson's final hours.

Police Detective Orlando Martinez said Murray told him he found Jackson not breathing just after 11 a.m. on June 25, 2009. But phone records showed 911 was not called until 12:21 p.m.

Jackson's burly former bodyguard Alberto testified that Murray instructed him to place medicine vials in bags before calling 911 on the day Jackson died.

Paramedics and an emergency room doctor all testified they thought Jackson died in his bedroom, before he was transported to a hospital where Murray insisted resuscitation efforts continue.

The medical personnel also said Murray didn't tell them he had given Jackson propofol.

Meanwhile, phone records showed the doctor was on the phone before and after he gave Jackson the propofol and sedatives.

Martinez testified that Murray described a nearly 10-hour ordeal of trying to get Jackson to sleep, giving him a valium pill and two other sedatives intravenously before yielding to the singer's demands for propofol.

Jackson called the anesthetic his "milk," and coroner's investigators later found several vials of it in a bag labeled "Baby Essentials" in Jackson's closet.

Martinez said Jackson told Murray if he couldn't get sleep, he might have to cancel his widely heralded "This is It" comeback tour. The doctor spoke of feeling pressured to give the star the propofol he wanted, the detective said.

Defense attorneys rarely call witnesses or present their own theories during preliminary hearings, which have a lower standard of proof than criminal trials.

Prosecutors said they expect the defense to claim Jackson administered the deadly dose himself while Murray was out of the room.

Jackson had been receiving propofol intravenously six nights a week for the two months before his death, Murray told detectives.