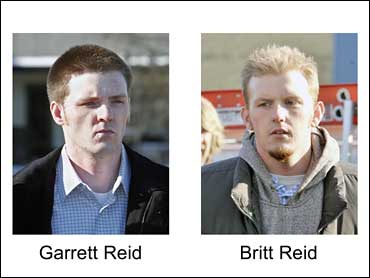 A judge who sentenced Philadelphia Eagles coach Andy Reid's sons to jail on Thursday likened the coach's home to "a drug emporium" and questioned whether his adult sons should live there.

"There isn't any structure there that this court can depend upon," Montgomery County Judge Steven O'Neill said before sentencing 22-year-old Britt Reid to up to 23 months in jail plus probation.

"I'm saying this is a family in crisis," O'Neill said.

Earlier Thursday, O'Neill sentenced 24-year-old Garrett Reid, a drug addict and dealer who said he got a thrill out of selling drugs in "the 'hood," to up to 23 months in jail for smashing into another motorist's car while high on heroin.

O'Neill noted that searches of the Reid home found illegal and prescription drugs throughout the house. He said both boys had been overmedicated throughout much of their lives and that Britt got hooked on painkillers when he suffered a football injury in high school.

"It sounds more or less like a drug emporium there, with the drugs all over the house, and you're an addict," O'Neill told Britt Reid.

Andy Reid and his wife, Tammy, were in court but declined to comment. The judge said the parents clearly loved and supported their children and had tried many times over the years to get them help.

"Andy and Tammy are supportive of their son. That has been their position since this all began. He will not comment on it," Garrett Reid's defense attorney, Ross Weiss, said before the judge's comments.

Both Weiss and Britt Reid's attorney, William Winning, declined to comment after the hearing. Andy and Tammy Reid quickly were escorted by sheriff's deputies and their personal bodyguard through the courthouse basement.

Both sons lived at their parents' home in the suburb of Villanova at the time of their arrests.

Andy Reid took a five-week leave from the Eagles in the off season to deal with his family's troubles. He has routinely declined to discuss his sons' legal problems, but said he would not resign from the team because of them.

On Thursday, Britt Reid said everything he did, he did without his parents' knowledge, but O'Neill questioned that.

Both Reids can apply for a special drug court program that would require them to report to authorities regularly, undergo rigorous drug testing and hold down jobs.

The coach's two sons got into separate legal trouble on Jan. 30.

Garrett Reid tested positive for heroin and admitted having used it that day. He ran a red light in Plymouth Township and hit another car. Authorities found syringes with heroin and testosterone in his SUV.

In a separate incident that same day, Britt Reid pointed a handgun at another driver following a dispute. He pleaded guilty to a string of charges, including carrying a firearm without a license, a felony.

CBS News affiliate KYW reported that police found a shotgun and hollow-point bullets along with cocaine, marijuana and OxyContin in the vehicle Britt Reid was driving and later found the handgun they believe he had brandished at the other driver.

While police found only weapons and ammunition - and not drugs - at the house, O'Neill apparently based his remarks on Britt Reid's statement that he once mistakenly grabbed a Vicodin tablet instead of health supplements out of a pill drawer at the home.

Britt Reid was sentenced to eight to 23 months in jail plus five years' probation on gun and drug charges. He can apply for the special drug program after five months.

Garrett Reid was sentenced to two to 23 months in the county prison plus one year of probation. He told O'Neill that he would apply to the drug court program.

"I don't want to be that kid who was the son of the head coach of the Eagles, who was spoiled and on drugs and OD'd and just faded into oblivion," he said in court.

Speaking in court and in a statement to a probation officer, Garrett Reid said he made a fast descent into hard drugs and enjoyed being the rich kid who dealt drugs in poor, violent Philadelphia neighborhoods and in the tony suburbs.

His addiction persists, according to authorities, who found 89 prescription drug pills in Reid's jail cell Thursday morning. They believe he smuggled them in his rectum when he was jailed earlier this week.

"That's consistent with someone as severely drug addicted as he is," prosecutor Costanzo said.

Garrett Reid's descent in drug use and dealing was steep, according to a probation report read in court. Reid said he didn't use drugs until he graduated from high school, then started with marijuana and alcohol at age 18. That was followed by prescription pain killers Percocet and OxyContin, and then cocaine and heroin.

Reid said he sold drugs to his friends and their parents in the suburbs and in a notoriously tough section of Philadelphia.

"I liked being the rich kid in that area and having my own high status life," Reid told a probation officer in a statement read by the judge. "I could go anywhere in the 'hood. They all knew who I was. I enjoyed it. I liked being a drug dealer."

He said in court Thursday that he has stopped selling drugs.

"I did get a thrill out of it," he said. "That was also part of the whole new world that opened up to me when I smoked that first joint."