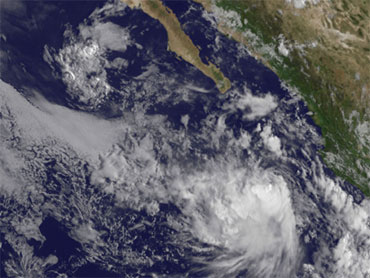 A judge, court reporter and deputy were killed and another deputy was wounded Friday in a shooting at the Fulton County Courthouse in downtown Atlanta. Authorities were hunting for the gunman, who fled in a carjacked auto.

The judge, later identified as Superior Court Judge Rowland Barnes, was shot on the eighth floor of the courthouse, while one of the deputies was shot on a street corner just outside the building, said Officer Alan Osborne with the Atlanta Police Department.

Authorities were searching for a green Honda Accord that was seized from a newspaper reporter.

Fulton County Sheriff's Lt. Clarence Huber identified the suspect as 33-year-old Brian Nichols, who was on trial on rape charges stemming from an incident in August.

It was not immediately known how the suspect got a gun, but county employee Ali Lamei said he was told by officers that a sheriff's sergeant was escorting a prisoner into Barnes' courtroom when the prisoner grabbed the sergeant's gun and shot the judge and sergeant.

Bailey said Nichols made him and other jurors nervous. "Every time he looked up, he was staring at you," Bailey said.

Lt. Gov. Mark Taylor announced the shootings on the floor of the Georgia Senate. "It appears that Superior Court Judge Rowland Barnes has lost his life, along with his court reporter," Taylor told lawmakers.

The Atlanta Journal-Constitution newsroom staff was being told that Don O'Briant, a features reporter for the paper, was beaten by the suspect and carjacked outside the courthouse. Mike King, an editorial board member for the paper, said O'Briant was taken to a hospital.

The shootings started shortly after 9 a.m. on the building's eighth floor.

"We heard some noise. It sounded like three or four shots. At the time, we thought it was just an engine backfiring," said Chuck Cole, a civil defense attorney who was in an adjoining parking deck when he heard gunfire at around 9:10 a.m.

"You're dealing with people who are not happy with something and have sued someone or are potentially facing jail or are fighting over custody of children, the kind of things that bring out the raw emotions that can cause problems," she said.

All the judges in the building were locked in their chambers. The courthouse and other buildings in downtown Atlanta were on lockdown. Traffic in the blocks surrounding the courthouse was backed up as police cruisers flooded the area looking for the suspect.

The recent murder of the husband and mother of federal judge Joan Humphrey Lefkow in Chicago has prompted concerns about judicial safety.

"Judges and their families must be better protected in this age of terror," said CBSNews.com Legal Analyst Andrew Cohen, speaking of the Lefkow case.

"I would be surprised if a judge doing criminal cases, or family-law cases, or certain civil cases, hadn't had somebody make a threat against them," Judge Gayle Nachtigal, president of the American Judges Association, told The Christian Science Monitor recently. "Are they all going to act on them? Probably not. But you do take precautions."

In one informal survey by the family law section of the American Bar Association in 1997, 60 percent of 253 respondents indicated they had been threatened by an opposing party in a case. In 1987, a Florida judge was shot and killed following an alimony hearing, and in 1983 an Illinois judge was killed in his courtroom by a man whose divorce case he was presiding over.

Among the recent cases that Judge Barnes handled was the sentencing of Atlanta Thrashers player Dany Heatley, who pleaded guilty to vehicular homicide in the death of a teammate.

Barnes, 64, also drew national attention last month when he took the unusual step of ordering a mother of seven who pleaded guilty to killing her 5-week-old daughter to have a medical procedure that would prevent her from having more children.

"People liked appearing in front of him. He was someone who you would want to appear in front of, you would want your case assigned to, because he had that calm demeanor to listen to both sides and then make a decision," Bernstein said.

Barnes was named to the Fulton County Superior Court bench on July 10, 1998. He also worked as a part-time Fulton County Magistrate and City Court Judge in Hapeville and Fairburn. Barnes was a 1972 graduate of Emory Law School in Atlanta and a graduate of Lebanon Valley College.