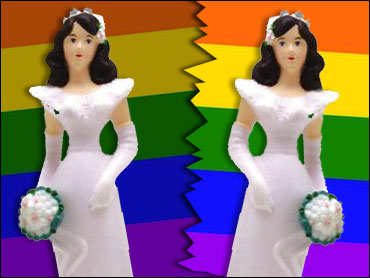 FORT LAUDERDALE, Fla. -- The first formal divorce for a gay couple in Florida history was granted Wednesday by a Broward County judge who used the case to join other judges in declaring the state's ban on same-sex marriage is unconstitutional.

Circuit Judge Dale Cohen on Wednesday dissolved the marriage of Heather Brassner and Megan Lade in a brief hearing. They were united in a 2002 civil union in Vermont but Brassner was unable to obtain a divorce in Florida for five years since their relationship ended.

"It's like an emotional weight being lifted off," said Brassner, who is from Lake Worth. "I just feel free and I couldn't have gotten a better holiday gift."

Cohen ruled in August that Florida's gay marriage ban is unconstitutional because it violates the Fourth Amendment's guarantees of equal protection and due process. Because the ruling came in a divorce case, it has the effect of also declaring that out-of-state gay marriages should be recognized in Florida. It does not mean same-sex marriage licenses can be issued in Broward County.

"This is a historic day. This is the first divorce for a same-sex couple. It will not be the last divorce," said Brassner attorney Nancy Brodzki.

Lade did not take part in the divorce and Brassner said she had not seen her former partner for several years. A private investigator was unable to find any trace of her, Brodzki said in court.

Brodzki said she expects Attorney General Pam Bondi to appeal the decision, just as she has several other rulings against the gay marriage ban by state and federal judges.

"We expect the state to continue to fight until there is no longer any possibility of them waging a fight," Brodzki said.

A spokeswoman for Bondi's office said the decision would be reviewed. The attorney general has been battling on several legal fronts in support of the same-sex marriage ban enshrined in the state constitution by voters in 2008.

At the federal level, U.S. District Judge Robert Hinkle has declared the same-sex marriage ban unconstitutional, but put a hold on gay marriages until the end of the day Jan. 5 to allow Bondi to appeal.

Justice Clarence Thomas, who hears emergency appeals from Florida, Georgia and Alabama, wants all briefs on the stay extension to be filed by late afternoon Thursday. There is no immediate timetable for his decision, and it remains unclear how many of Florida's 67 court clerks would issue marriage licenses to same-sex couples if the stay is lifted.

State appeals courts are considering several other rulings that would strike down the same-sex marriage ban.