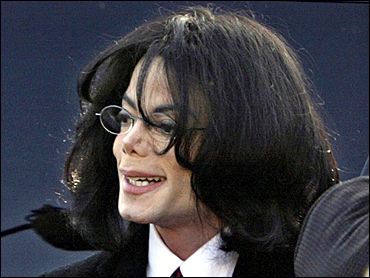 A judge Monday rejected a defense motion to dismiss the child molestation case against pop star Michael Jackson because his rights allegedly were violated by a flurry of searches.

Prosecutors countered that 92 of the warrants targeted business records and did not involve searches of Jackson's property.

Judge Rodney S. Melville sided with prosecutors. "There was probable cause and they were carried out in a normal manner," he said.

Melville did, however, grant a defense request for a list of people considered for the grand jury that indicted Jackson; his lawyers are trying to determine if blacks and Hispanics were excluded.

The rulings came during pretrial hearings that could last most of the week.

Sanger urged the judge to delay the start of the trial for three months, claiming prosecutors had "sandbagged" the defense team by turning over incorrect and misspelled witness names.

"We're very conscious that the court did not want to hear the 'c' word," Sanger said of the request for the continuance. "The problem is we feel we're really being sandbagged here on a number of things."

District Attorney Tom Sneddon accused the defense of hyperbole. Of the 164 names on the updated list, 70 were taken from the defense, he said. Sneddon acknowledged a few spelling errors but said the names should have been easily recognizable.

"We are ready for trial and we oppose a continuance," Sneddon said.

During the hearing, both sides estimated the trial could last as long as five months. Melville was expected to rule on the defense's request for a delay in the next few days.

The trial is currently scheduled to start Jan. 31.

Jackson, 46, is charged with molesting a boy, conspiracy and administering an intoxicating agent, alcohol, to his alleged victim. The entertainer has pleaded not guilty. He was not required to attend this week's hearings.

Jackson's attorneys are also asking that charges be dismissed on grounds of "vindictive prosecution and outrageous government conduct." Melville previously rejected a similar defense effort to remove Sneddon from the case.

Prosecutors had been expected to argue that they should be allowed to present evidence of alleged wrongdoing in the entertainer's past. That motion won't be heard until next month.