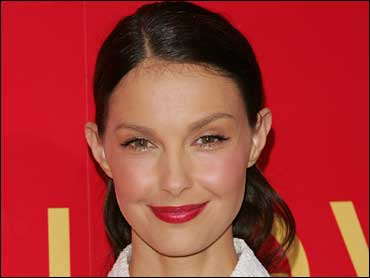 By The ShowBuzz.com's Caitlin A. Johnson.

Ashley Judd is the daughter and sister of country music legends. Some would say she grew up with a sliver spoon.

But the actress, who stars in the upcoming movie "Crossing Over," says she was born with the divine gift of empathy, which makes her not take her privileges for granted and want to give back to the community.

"I think that empathy is a gift from God," she told The ShowBuzz. "Somehow or another, by the grace of God, I got the intolerance-and-exquisite-sensitivity-to-poverty gene. I like that about myself ... I got a little distracted there by Hollywood for a while, felt very satisfied by what I had accomplished and then an organization called Population Services International approached me the same week that Bono approached me and said we'd like for you to be a part of empowering poor people."

Judd, 39, who is married to Indy race car driver Dario Franchitti, became a YouthAIDS global ambassador in 2002, and has worked tirelessly on behalf of the poor and vulnerable. She has said that service work is her highest priority. It is with that mindset that she embarked on her latest mission, an affordable clothing line. She has three new labels to be sold exclusively at Goody's stores: A.J., Love, Ashley and Ashely Judd.

Goody's Family Retailers is headquartered in Knoxville, Tenn., and has many locations throughout the Southeast. When she was first approached, Judd said she wasn't interested. She believes that there is already "too much stuff in the world"

"They basically approached me and said we want you to come be you," she said. "I get to bring my service work, philosophy ... it became clear that they weren't trying to impose their marketing strategy on me."

What Goody's helped her see is that she doesn't have philanthropy service in her beloved Southeast. So in her first year alone, she and Goody's will give away $500,000 to schools that demonstrate need. She is also making sure that many of her clothes are made from organic fibers.

"I'm really hoping that my customer will be very inspired by the idea of wearing clothing that is cruelty free -- cruelty free to people who manufactured it and friendly to the earth," she said.

As well as a philanthropist, Judd is also a perennial scholar who her mother, Naomi Judd, called an "intellectual pinup." Judd graduated from the University of Kentucky in 1990 but didn't realize she had fulfilled all the required credits. It was only until she gave a lecture at the school and talked to the dean, who asked her when she was going to sign the form to receive her degree. She had three physical anthropology classes that had fulfilled the science requirements she thought he lacked.

"Basically, I wouldn't get off my own back. I hadn't thought I had done it good enough," she said. "I had 140 some odd credits and it takes is 120 to graduate. I couldn't get enough. I was constantly running around from college to the next getting the required signatures so I could take classes above the level for which I was qualified -- a four-year streak of perfection in the extreme."