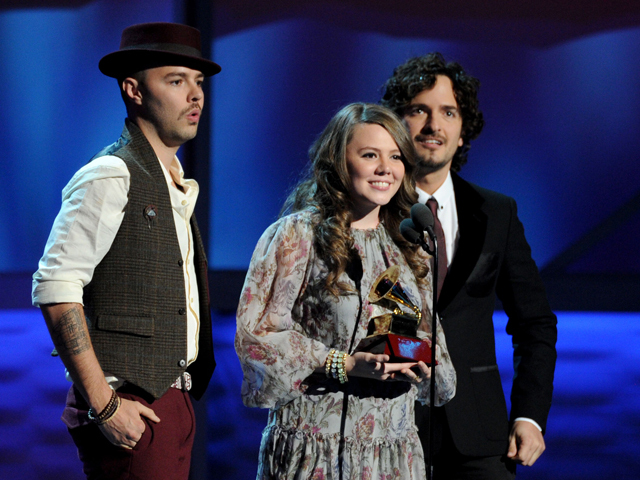 LAS VEGAS With their hit "Corre!" Mexican brother-sister pop duo Jesse & Joy ran away from the pack with four awards, including best song and best recording, at the 13th Annual Latin Grammys in Las Vegas on Thursday night.

Hosted by actors Cristian De La Fuente and Lucero, the ceremony attracted super-stars new and old, from across the world and from every Latin musical genre to the Mandalay Bay Events Center.

Just like at a big, multi-generational family party, new faces shared the spotlight with older generations, and traditional genres blended with electronica and hip-hop on stage.

Dominican musician Juan Luis Guerra, who came into the ceremony as the leading nominee with six bids, won producer of the year for Juanes' album "MTV Unplugged," which is also up for album of the year.

Guerra performed "En el Cielo No Hay Hospital," which brought the audience to its feet to dance, and for a standing ovation. He can only win four awards, since he is competing against himself in two categories.

"Long live merengue! Long live the Dominican Republic!" she said as she accepted the award.

If Colombian rocker Juanes wins in three of the four categories he's nominated in, he will become the most decorated Latin Grammy winner, breaking the record held by Puerto Rican rappers Calle 13.

Jazz trumpeter Arturo Sandoval brought three Latin Grammys for "Dear Diz (Every Day I Think of You)," but said it was just exciting as his first.

"The emotion is the same because one puts the same effort into each recording and the fact that the work is received well and respected by the public is a great satisfaction," he said.

The Latin Grammy celebration kicked off Wednesday by presenting its Person of the Year award to Caetano Veloso, one of the founders of the Tropicalismo movement.

The Brazilian singer, composer and activist was honored with performances by Juanes, Guerra, Nelly Furtado and Natalie Cole.

The event was broadcast live on Univision.