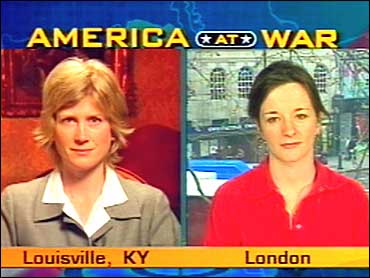 Four journalists who went to Baghdad to cover the war became the story. This morning, they're enjoying their first day of freedom after a harrowing encounter with Saddam's security forces, CBS News Correspondent Randall Pinkston reports.

And back on the homefront, their friends, families and coworkers are celebrating.

The four journalists arrived in Jordan Tuesday night, after six days in an Iraqi prison and interrogation - at times at gunpoint.

Reporter Matthew McAllester and his photographer, Moises Saman, work for Newsday, a New York newspaper. Eight days ago, they were grabbed by Iraqi security forces from their hotel rooms in Baghdad. At first, they were told to leave the country. Then, they were arrested.

Janey McAllester heard the news of her brother's release Tuesday evening, she said on The Early Show.

"His editor rang, and shrieked down the phone at me in a quite hysterical way and then a few minutes later, Matt rang from the border, where they had all been left," she said. She added that she does not know yet why he was arrested.

They all had entered Iraq on tourist visas, not as journalists. They were handcuffed and held in separate cells in Iraq's infamous prison on the outskirts of Baghdad.

The Newsday journalists told their editors that they were asked if they worked for the CIA or the Pentagon. They said no explanation was ever given as to why they were taken into custody or released.

"We thought we were going to be killed at any moment," McAllester is quoted as saying in Newsday's Wednesday edition.

Janey McAllester said, "They had had a pretty hellish time. Each of them held in solitary confinement and interrogated, and there were other people being beaten up in the corridor outside, and there were bombs falling everywhere around them. So that was just as dangerous as what the Iraqi police or whoever they are, were actually doing to them."

McAllester and Saman said they could hear an anti-aircraft battery being fired from within the prison and felt bombs exploding in and around Baghdad. "At times it was extremely close," Saman said. "The cells would kind of rumble." The pair also said they heard the screams of other prisoners being tortured and saw some with their eyes and faces bloodied and swollen. The two journalists were kept in separate cells and were unable to talk to each other.

After their detention, the group was driven to the Jordanian border by Iraqi officials. An adviser to the Palestinian Authority told Newsday that the release of the two Newsday staffers was facilitated by the intervention of Palestinian leader Yassir Arafat.

Ed Abington, a Washington, D.C.-based adviser to the authority, said Arafat instructed one of his former ambassadors to Iraq to contact the head of Iraqi military intelligence and push for the journalists' release.

"As far as I know, they weren't physically maltreated at all," McAllester's sister said.

Emily Bingham said her sister photographer Molly Bingham had requested the International Committee of the Red Cross to see her in prison. But the request was denied.

"She was mainly conveying how sorry she was for what her family had gone through. She also expressed that she had attempted to have the International Committee Of The Red Cross come to the prison where she was held to see her, just to vouch for her physical safety, so that people at home wouldn't have been quite as frantic as we were," Emily Bingham explained.

She also said her sister was absorbing what happened during her captivity and pointed out that this may take her a long time. "It's a story that's going to take her awhile to even explain and tell."

Barry Bingham Jr., former publisher of The Courier-Journal in Louisville, received a call from his daughter, Molly, at 1:15 p.m. EST.

"His heart was pounding, you could see it in his throat," said Edie Bingham, referring to her husband's phone conversation with their daughter. The Binghams held a news conference Tuesday afternoon in downtown Louisville.

"Molly said she is OK," Barry Bingham said. "She said she had had a rough week and sounded tired, but she said she was all right."

Molly Bingham spent 2 1/2 years as former Vice President Al Gore's documentary photographer for the National Archives. She also has recorded the plight of beleaguered people and places in Afghanistan, the Gaza Strip, Burundi, Sudan and Iran.