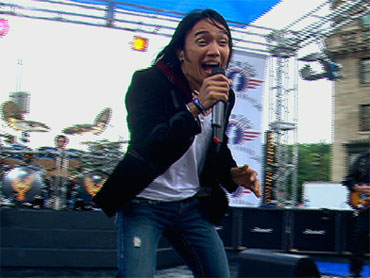 Journey visited "The Early Show" Thursday as part of the Summer Concert Series, performing old hits, such as "Don't Stop Believing," "Any Way You Want It" and "Faithfully," and new songs from their recently released album, "Revelations."

Since forming more than 35 years ago, the rock super group has sold more than 80 million albums worldwide, and produced 18 top-forty singles. And now, the legendary band is enjoying a resurgence.

In an era known for big hair and acid wash jeans, Journey became one of the quintessential bands of the '80s rock 'n' roll movement.

CBS Sunday Morning: "A Journey Back"

Now, the rock stars of yesteryear are enjoying a revival, thanks to the determination of guitarist Neil Schon, who searched high and low for the right voice to fill the void left by singer Steve Perry.

Schon said, "I think what we were looking for was the legacy sound. It's a tenor voice, you know, with soul and emotion and able to sing a ballad."

But with a little help from YouTube, Journey found that soul and emotion halfway around the world in Arnel Pineda, who was singing in a cover band in the Philippines.

Ross Valory, the band's bassist, said, "It's all brand new with this -- this new friend. But it's also like we've returned to where we left off. ... We got the magic back."

As for Pineda, he said when he got the call to join Journey he thought it was one of the weirdest moments of his life.

He said, "(It was a) guitar god calling me, asking me to audition for them."

And why did Journey choose Pineda?

Schon said, "His pipes spoke for himself. I mean, really I heard through the little computer speaker, I heard his voice and I went, 'Wow, that guy has got a serious voice.' And I listened to 40 other clips of him singing everything, and I was like he's got it going on."

"Early Show" co-anchor Maggie Rodriguez pointed out Pineda sounds a lot like Steve Perry, whom he replaced. Perry left the band after a falling out.

"He's one of my influences," Pineda said. "It would be an honor to be in line with him."