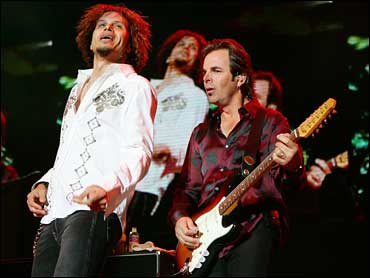 There was only one hit in the final scene of the series finale of "The Sopranos" — but it wasn't the kind that would have killed Tony Soprano.

Instead, as the mob boss shared a plate of onion rings with his wife and son at a local diner, the 1981 Journey hit "Don't Stop Believin'" joyfully blared in the background.

"I always imagined 'Don't Stop Believin' as a street song," he told The ShowBuzz. "You know 'streetlight people/living just to find emotion/hiding somewhere in the night.' That sounds like Tony and his family."

"In a nutshell," he continued, "I think that Tony needed a feel-good song for the moment. The way I read it was his family meant a lot to him and as he was waiting there in the diner that's a feel-good moment."

Cain acknowledges that despite the "feel good" sentiment, there is tension in the song that reflects Tony's troubles.

"The lyrics 'some were born to sing the blues' was something he seemed to be doing a lot to his shrink," he said.

When Cain learned that the song would be used on the show, he decided to keep it a secret from his family and friends so they would enjoy the surprise on finale night.

"They absolutely freaked out — they were jumping up and down!" he said. "We were just riveted to the screen. It couldn't have been more of a dramatic moment in the series for us."

The band had its own dramatic moment Tuesday with the announcement of a parting of the ways with their lead singer, Jeff Scott Soto.

Cain praised Soto for stepping in for Steve Augeri whose throat problems forced him to stop performing in the middle of the Def Leppard tour last July. The band named Soto their permanent lead singer in December.

"Soto came in," said Cain. "We were grateful for his energy and his time and his talent. We had a good 11 months with him."

Cain said that the band will be taking some time off and will begin their search for a new singer at the end of the year.

In the meantime, they're enjoying the additional popularity from their big night on "The Sopranos." On iTunes, the boost from the mob hit lifted "Don't Stop Believin'" to No. 19 in number of downloads, as of Wednesday.
By Judy Faber