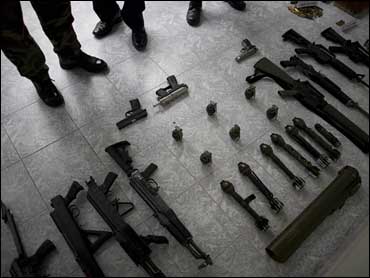 An international journalism group increased pressure on the Mexican government Tuesday to fight back against lawlessness in a border town known as a hotspot of drug-related violence.

The Committee to Protect Journalists called on Mexican President Felipe Calderon Tuesday to make safeguarding reporters "a top priority on its agenda" in the wake of a Dallas Morning News article on the abductions of at least eight Mexican journalists in the past two weeks in Reynosa. One of the kidnapped journalists was believed to be dead.

"As drug trafficking, violence and lawlessness continue to spread pervasive self-censorship is undermining Mexican democracy," Carlos Lauria, the committee's senior program coordinator for the Americas, said in a statement. "We urge Mexican authorities to fully investigate the abduction of reporters in Reynosa and ensure that these crimes do not remain unpunished. We call on the government of President Felipe Calderon to provide safety guarantees for the press, and to make the protection of free expression a top priority on its agenda."

Lauria told the San Antonio Express-News his statement was not just a reaction to the Dallas newspaper's article but to also interviews with Mexican editors and reporters.

"The problems we are now finding is that there's a lot of fear," Lauria told the San Antonio newspaper. "There's a lot of self-censorship. It's widespread. It's really bad."

Lauria said that fear made many sources reluctant to provide the committee their names or identify the victims.

Five of the journalists are still missing, including a reporter from the newspaper El Manana, a freelance photographer for La Tarde, two online reporters and a television cameraman.

Ciro Gomez Leyva, an editorial director for Mexico City-based Grupo Milenio, said alleged drug gang operatives abducted two of its journalists, beat them and threatened them before letting them go. They immediately flew back to Mexico City.

"In more and more regions of Mexico it is getting impossible to do journalism," Gomez Leyva said in a report published by the Mexican Center of Journalism and Public Ethics. "Journalism is dead in Reynosa."