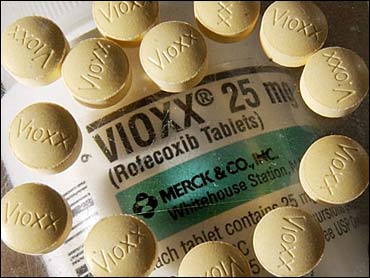 Authors of a study funded by Vioxx maker Merck & Co. failed to disclose in a report published in the New England Journal of Medicine in 2000 that three additional patients in a clinical study suffered heart attacks while using the now-withdrawn painkiller, the journal wrote in an editorial released Thursday.

"Taken together, these inaccuracies and deletions call into question the integrity of the data on adverse cardiovascular events in this article," the doctors wrote. Excluding the three heart attacks "made certain calculations and conclusions in the article incorrect."

CBS News medical correspondent Elizabeth Kaledin reports that in an unprecedented move, the journal published what it calls an "expression of concern," chastising the study's authors and saying "at least two of the authors knew about the three additional (heart attacks) at least two weeks before submitting… drafts of the study."

The findings of what became known as the VIGOR study have been a key part of testimony in the three product liability trials to date over the withdrawn drug, including one in which a federal jury in Texas began deliberations Thursday afternoon. Plaintiff attorneys claim the study showed Vioxx was dangerous, but the company disputed that.

Merck shares fell 61 cents, or 2 percent, to $29.68 in regular trading on the New York Stock Exchange, then fell an additional 85 cents, or 2.8 percent, to $28.85 in after-hours trading, after news of the journal editorial circulated.

In a statement issued late Thursday, Merck said the additional heart attacks "did not materially change any of the conclusions of the article," which was published in November 2000, more than a year after the Food and Drug Administration approved Vioxx. The company also said the information was not included because the heart attacks were reported after Merck's cut-off date for collecting information on the patients in the study.

"Nevertheless, these additional events were disclosed to the FDA in 2000, presented publicly at the FDA's Advisory Committee in February 2001, and included in numerous press releases subsequently issued by Merck," the company statement reads.

But Curfman said in an interview that Merck's arguments about the cut-off date "don't hold water" because journal articles are routinely updated with new data in the weeks before publication. "The health of the public, of many, many thousands of people, was at stake here," he said.

Data in Thursday's editorial show that 20 patients on Vioxx suffered heart attacks, instead of the 17 originally reported. Among patients in a comparison group taking the older, cheaper anti-inflammatory naproxen, there were four heart attacks.

None of the three extra heart attacks was fatal, but that all three of those patients were in a group at low risk of heart attack, Curfman said.

The journal editor said he learned of the extra heart attacks and deleted data — including the number of patients in the study who died — when he gave a deposition on Nov. 21 for attorneys representing Vioxx plaintiffs in the Houston trial and three other federal trials slated for early next year. At the deposition, the plaintiff lawyers showed him documents they subpoenaed from Merck, including a July 2000 internal memo containing the deleted data.

Curfman said he and Morrissey spoke Monday with two researchers who led the study and the two, who do not work for Merck, said they would submit a correction to the journal as the editors requested.

The third author of the study was Dr. Alise Reicin, Merck's vice president for clinical research. Reicin testified on Wednesday in the Houston trial that the company never misled doctors and the public about studies linking heart attacks to Vioxx.

Plaintiff's attorneys declined comment in Houston on Thursday when asked if the New England Journal revelations might prompt them to ask for a mistrial. Attorneys in that trial are honoring the judge's request that they not to speak to the media until a verdict is reached. The jury ended deliberations on Thursday without reaching a verdict.

Merck withdrew Vioxx, once one of its top-selling drugs, from the market on Sept. 30, 2004 after other research showed the popular arthritis drug doubled risks of heart attacks and stroke with long-term use. The company now faces at least 7,000 lawsuits over Vioxx and legal liability some analysts have estimated could reach $50 billion. Those problems were part of the reason Merck last week announced plans to cut 7,000 jobs and close eight manufacturing and research facilities around the world as the first step in a sweeping reorganization.

Dr. Eric Topol, chairman of cardiovascular medicine at the Cleveland Clinic, first published his concerns about Vioxx's safety in 2001 after finding discrepancies between the Journal article and data at the FDA. In a videotaped deposition shown at the Houston federal trial, Topol accused Merck of scientific misconduct by misrepresenting data.

Topol said he felt vindicated by the journal article. "This is what I've been asserting for some time," Topol said.

An official at the University of Toronto said lead article author Dr. Claire Bombardier could not be reached for comment.