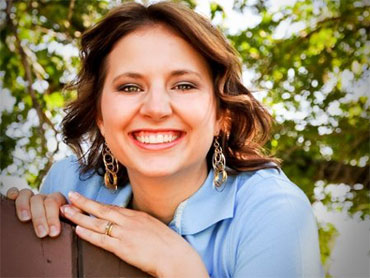 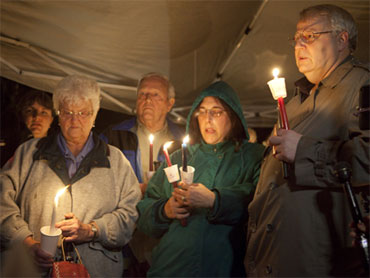 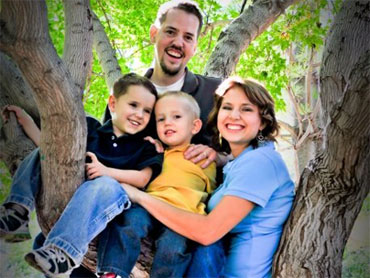 (Hardman Photography)
PUYALLUP, Wash. (CBS/AP) Josh Powell joined more than 60 people at a candlelight vigil in Washington state for his wife, Susan Powell, who has been missing for two weeks, even while Utah police consider him a "person of interest" in her disappearance.

Susan Powell was reported missing Dec. 7 when she didn't show up to work and her children weren't dropped off at day care. Police responded to the family residence in the Salt Lake City suburb of West Valley City and found it empty except for two fans pointing at a wet spot on the rug.

Josh Powell told police he took his two boys, ages 2 and 4, camping around 12:30 a.m. that day and returned in the evening.

Josh Powell stood surrounded by supporters who shielded him with umbrellas while rain poured down on the proceedings. His 4-year-old son Charlie accompanied him and held a candle for his mother.

Susan Powell's family and friends were clearly shocked that Josh Powell had decided to attend the vigil, they have said that they were saddened that he was named as a person of interest in their loved one's disappearance but not surprised.

Vigil attendees stood under tents out of the rain, singing and signing a large poster with Susan Powell's picture on it.

Photo: Susan Powell with her husband Josh and two sons, Charlie and Braden.

After the vigil Josh Powell spoke briefly with his wife's sister, Denise and gave her a hug, The Salt Lake Tribune reported. She later told the Tribune that she asked him how he and the children were doing and if he could speak to him later and that he agreed to meet with her.

Susan Powell's parents, Chuck and Judy Cox, walked past Josh Powell after the vigil without speaking to him.

Approached on Sunday outside his house in the gated community of Country Hollow in South Hill, about 10 miles south east of Tacoma, Wash., Josh Powell's father Steven told The Salt Lake Tribune that he felt his son was being vilified by the press and that his entire family was being scrutinized, "I'm not making any statement because it doesn't matter how benign it is or how supportive it is. Somebody will twist it around," he said.

Josh Powell brought his two sons, Charlie and Braden, 2, to Puyallup to visit his father for the Christmas holidays. There are no restrictions on his movements according to Capt. Tom McLachlan with the West Valley City Police in Utah.