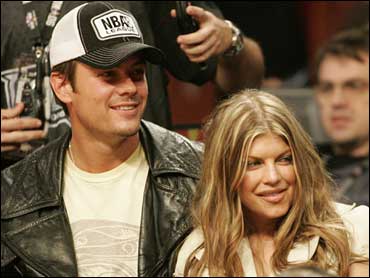 "Las Vegas" hunk Josh Duhamel and his girlfriend, Fergie, are a match made in Hollywood heaven with hot looks to match their hot careers. But Fergie, who's been heating up the pop charts, is the flashier one.

"She's a real, total star," Duhamel says in the July issue of Best Life magazine, on newsstands June 26. "I'm more subdued than that. I'd rather sneak up on people. But that's what makes us work. We have similar fundamental values. We both grew up in similar families. She's just got a great soul."

Duhamel, 35, and 32-year-old Fergie (real name: Stacy Ann Ferguson), who performs with the Black Eyed Peas and as a solo act, have been dating for nearly three years. The couple have no immediate plans to marry, according to Best Life, and recently bought a house together. A big house.

"A girl like Fergie comes with stuff — a lot of stuff," Duhamel says. "And there just wasn't enough room for the stuff."

Duhamel got his start on ABC's "All My Children" before graduating to prime time (NBC's "Las Vegas") and film ("Turistas," "Win a Date with Tad Hamilton!"). He co-stars with Shia LaBeouf and Jon Voight in the Paramount Pictures action movie "Transformers," directed by Michael Bay, which opens July 3.

"There's still so much more I want to do," he says. "Before it was about gaining confidence. Now it's about gaining some respect for what I do. Get that, and everything you want will come along with it because people will want to work with you."

"There are actors my age who are just incredible," says Duhamel, who studies the work of Matt Damon and Ryan Gosling. "They set the bar, and that's where I want to be."

The A-list competition helps sharpen his drive for success.

"It always feels like I have to prove myself to be more than what people think they see," he says. "That's part of what I'm fighting right now. People don't know what you're capable of until you actually do it."