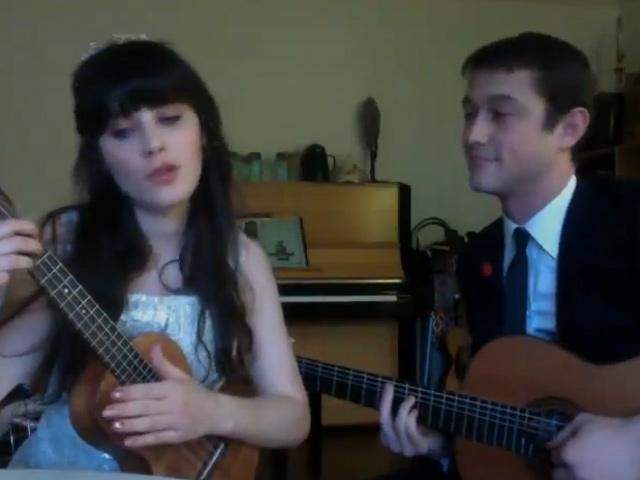 (CBS) Zooey Deschanel and Joseph Gordon-Levitt captured many hearts in their indie romance "(500) Days of Summer" and now the two are joining forces again in a YouTube video. The two actors/musicians teamed up to record a cover version of the classic "What Are You Doing New Year's Eve?"

Pictures: They're With The Band

Deschanel and Gordon-Levitt bring their chemistry from the big screen to the internet. Deschanel, who also stars in the Fox sitcom "New Girl," wore a silvery white party dress with a sparkly tiara while she played her ukulele in the video and Gordon-Levitt, who will be featured in Christopher Nolan's "The Dark Night Rises" and Steven Spielberg's "Lincoln," wore a black suit and tie while accompanied her on the guitar.

Deschanel's musical talents are no secret -- she has released two albums with her bandmate M. Ward under the name She & Him. The songstress' new comedy was picked up for a full season and also received a Golden Globe nomination.

Along with Gordon-Levitt's two big films in 2012, he also released a book entitled, "The Tiny Book of Tiny Stories," based off of posts on his website, hitRECord.org.