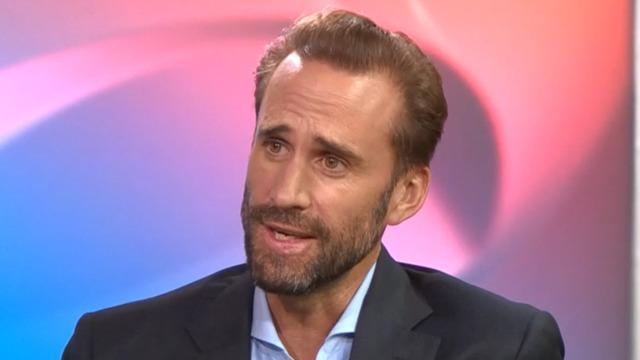 Joseph Fiennes, who stars as the brutal Commander Fred Waterford on "The Handmaid's Tale," is opening up about how the Hulu series mirrors the news headlines. The actor talked about parallels between the show and real life during a new interview with Tanya Rivero on CBSN.

For example, one recent storyline focused on family separations even as protests erupted over immigrant families being separated at the U.S. border. "Our writers are clairvoyant," Fiennes said. "I think our writers, like Margaret Atwood and Bruce Miller, our showrunner, have really tapped into something extraordinary, creatively, and tapping into the energy and psyche of society the way they do has sort of brought about a parallel between our show and what's happening."

He continued, "But I think it's people who are cognizant about what's going on in society, the movement of that. We've certainly got lucky with certain political movements and the zeitgeist right now, without doubt but I think it's a testament to the show and what Atwood and the writers of the show are tapping into."

Fiennes said he's moved by women who dress as handmaids at protests.

"It's vital," he said. "To have our show and that iconic look of the handmaids become a way of demonstration is kind of heartening for us. And I think on our show, it means we have a great responsibility to that movement and to those voices."

He also said that he hopes the show galvanizes men into action.

"I hope it's touched a nerve also with men. It really depicts what's going on, what has gone on ... It's alerted me and sharpened my outlook and antennas to what's going on."

He added, 'Don't go to sleep, because this might come back -- the fundamentalism comes back in waves."

Watch the video interview above to see what Fiennes has to say about his character's evolution.