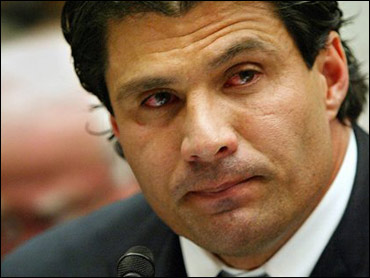 Jose Canseco, the former American League MVP who made millions during his baseball career, has had his home foreclosed.

Canseco told the syndicated TV show "Inside Edition" that he walked away from his $2.5 million, 7,300-square foot home in suburban Encino because it didn't make sense to continue making payments.

"I do have a judgment on my home and it to me is very strange because it didn't make financial sense for me to keep paying a mortgage on a home that was basically owned by someone else," he said in an interview that aired Thursday.

"You know my life, this financial thing, is a very complicated issue. Obviously, when you make all that money, people think, `OK, let's assume it is $35 million.' People have to understand that $35 million, you're paying the government 41 percent. That leaves you with about $17 or $18 million, not even. Then you're taking care of your whole family."

He added that a couple of divorces cost him $7 million or $8 million.

Canseco said his top earnings year was $6 million and that his financial situation obviously is different than most people who are losing their homes.

"What about other families that we're hearing on TV, that they're saying, `We have nowhere else to go,"' he said. "I mean, that is amazing. I've got books (he's put out two expose-type books on drug use in baseball), we're now trying to produce the movie to both.

"Like I said, my situation was a little more different than most. I decided to just let it (the house) go, but in most cases and most families, they have nowhere else to go."

Calls by The Associated Press to Canseco and to his attorney, Greg Emerson, were not immediately returned.

On the web
The mortgage crisis