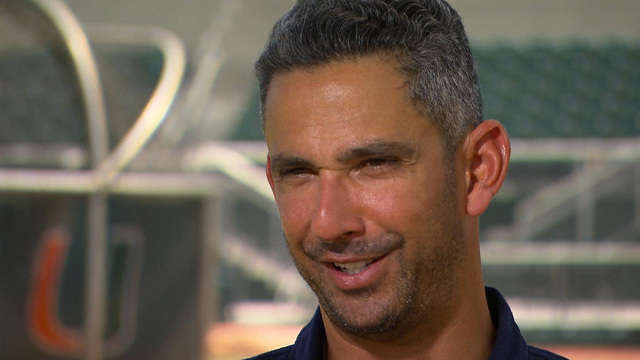 Retired Yankees catcher Jorge Posada played his entire career with the New York Yankees during one of the most successful eras in the team's history.

Now, Posada has quite a story to tell - about his family, big-league baseball and the "Steroid Era" that tainted the game, reports CBS News correspondent Mark Strassmann

Posada said he never took steroids or any performance enhancing drugs, nor was he tempted.

"There was times that you thought about it, but there was a lot of things that made me stay away," he said.

"I never had a guy that told me 'This is gonna help you.' Thank God, you know? I don't know what I would've done. But I stayed away," Posada said.

Posada belonged to the Yankees' "Core Four." They won five World Series titles. His career lasted from 1995 to 2011, during the height of baseball's "Steroid Era." Many players who shattered records were later linked to performance-enhancing drugs, including teammates Roger Clemens and Alex Rodriguez, who was suspended last season for using PEDs and lying about it.

He doesn't think players who were known to have used steroids should be in the Hall of Fame.

"I don't think it's fair for the guys that have been in the Hall of Fame that were that played the game clean," he said.

"Yeah. I don't think it's fair. I really don't," Posada said. "I think the guys that need to be in the Hall of Fame need to be players that played with no controversy."

Posada said Rodriguez would be surprised to hear that.

When the Yankees and Red Sox brawled in 2003, the Boston pitcher threw 72-year-old Yankees coach Don Zimmer to the ground.

"He's not on my favorites or in my telephone. When we were in Boston, he was making weird, you know, calling me 'Dumbo,'" he said. "I just don't respect this guy."

In his book, "The Journey Home," Posada talks about his other "Core Four" -- his family.

As a kid in Puerto Rico, he was never the team's best player. But no one worked harder. His tough-love, Cuban-born father made sure of that.

The hard work paid off. As a Yankee minor leaguer, he met his future best friend, Derek Jeter.

On a trip to Puerto Rico, Jeter shamed Posada into talking to a woman he had his eye on.

In 2000, Posada married his wife, Laura. Jeter was best man.

Their first child, Jorge Jr., was born into crisis. He had craniosynostosis, a condition that fuses the skull bones prematurely, leaving the brain with no room to grow.

"We get the news when he's 10 days old and [the doctors] tell us that they're gonna operate him, they're going to peel his skin, take the bones out, reconstruct the bones, and put 'em back together like a puzzle," he said. "Not knowing. That was -- that was the toughest part."

He said there was a week that he doesn't remember things that happened on the field.

In August, Posada will get what any Yankee would want: his number 20 retired and a plaque in Yankee Stadium's Monument Park, alongside Mickey Mantle, Lou Gehrig and Babe Ruth.

"I don't know how I'm going to feel. Right now I'm getting already emotional about it," he said. "You know, you're talking about the greatest franchise, history of baseball. And you being a part of this. It's such an honor."