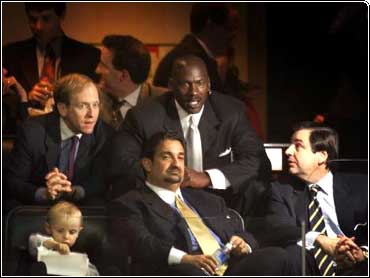 Michael Jordan wasn't able to pull off a deal to help his awful team. Then he watched his players get beat badly and ripped them for lacked of dedication.

"I don't think it's a lack of talent," said Jordan, who became the team's president of basketball operations and a part-owner last month.

And, with a new luxury tax due on the horizon for teams that are well over the cap, the Wizards are in a bind Jordan can't fix.

"Right now we have three situations, three contracts that put us right in the area that you have to deal with the luxury tax," Jordan said. "If it's a successful situation and they're producing and we're winning, I'm not afraid and I'm pretty sure the management will forfeit some of the luxury tax."

"But if it's within a losing situation where we're not really successful, then quite naturally we have to evaluate and move some of those big contracts."

Jordan said some of the inquiries he had give him encouragement that a deal could be made in the offseason. Meanwhile, he's dealing with a lot of losing. Firing coach Gar Heard and hiring Darrell Walker hasn't helped the won-loss record.

"It's a little frustrating," Jordan said. "It's something I won't get used to. It's OK that we're going through a transitional period with the coaching change with not really the continuity among this team, but very soon I will demand some type of compromise amongst the talent on this team."

Jordan also said he supported general manager Wes Unseld, who has accepted a five-year contract extension that was on the table before Jordan arived. The extension appears to go against Jordan's initial pledge that everyone was expendable while he evaluated the organization.