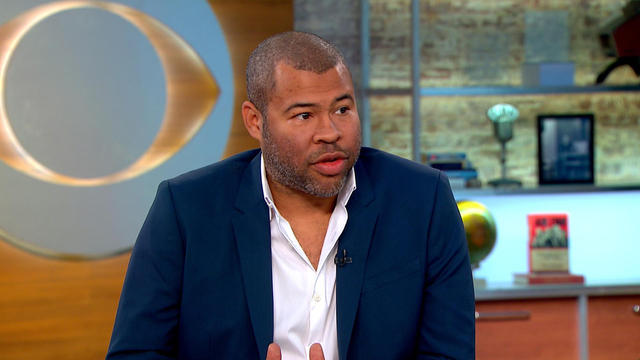 Critics are predicting that "Get Out," a thriller and social commentary on race relations in America, will be a best picture contender at this year's Academy Awards. The movie centers on a black man who meets his white girlfriend's family for the first time and soon discovers something is amiss.

The film's writer and director, Jordan Peele, told "CBS This Morning" he was inspired to make the movie because he felt "racism was not being called out sufficiently enough."

One of the movie's most memorable moments comes when the main character meets his girlfriend's dad who tells him he would have voted for Barack Obama for a third term.

That perspective is what inspired many of the situations the main character finds himself in the film — situations, Peele said, that are harmless only on the surface.

"In the party scene in 'Get Out,' for example, there's a scene where, you know, it's a group. He's the only black guy. It's a bunch of older white people who are trying to connect with him on his blackness first," he said. "What I wanted to point out with this film is that it's connected to the real, the deep horror of racism."

Peele got his start in quite a different world from horror – comedy. He got his break on Mad TV and later co-created and starred in the Emmy-winning sketch series "Key & Peele." But for Peele, there's an in inherent similarity to the opposing genres.

"I mean, they're both — for me, they're about truth. If you're not accessing something that feels true, you're not doing it right," he said. "You have to be very tuned into the audience and their emotion and that's why with both forms, the technique is tension building and release."

Despite a highly successful run in comedy, Peele said filmmaking was always his goal.

"I got sidetracked with an amazing, fortunate comedy career, which was, you know, a joy. I spent 10 years laughing, you know. But I had something else to say. I had something, I think, a more important statement that I had to put in a long form," he said.

For Peele, it was important that even the moments of comedy in the movie reflect the larger truth he was trying to tell.

"Lil Rel Howery, who plays Rod, his character was kind of the release valve for the audience. It was important for me that he comes in and he speaks the truth, too. So there's no line that is intended for – there's no jokes in the movie. It's all meant to feel true," he said.

In addition to rave reviews from critics, "Get Out" was also a stunning financial success. The movie cost about $4.5 million to make and has earned $253 million worldwide so far.

"I think part of it is because people see it in multiple times. For me as a filmmaker, I can't think about budget. I just – nothing is going to stop me."