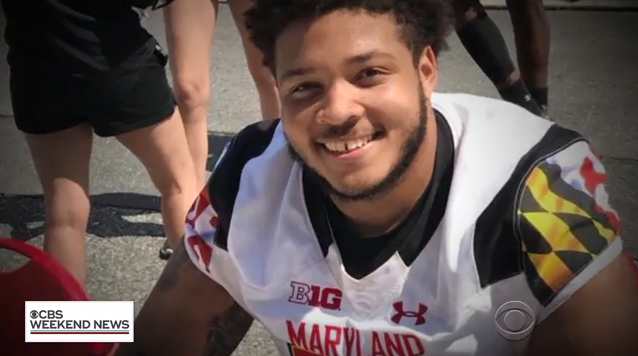 TOWSON, Md. -- An independent investigation into the death of University of Maryland football player Jordan McNair has determined that trainers on the scene did not follow proper procedures after he collapsed on the field. Dr. Rod Walters, who conducted the investigation into the 19-year-old's death, said Friday, "Hindsight is 20-20. If we identified it earlier, it might have changed things."

McNair was hospitalized on May 29 after a team workout and died June 13. The family attorney said the cause of death was heatstroke.

Walters, a former college athletic trainer and sports medicine consultant who led the investigation launched by the school following McNair's death, said Friday "there was a failure to identify symptoms and aggressively treat it."

Walters says there needs to be a plan "to identify those escalating symptoms if they are elevated - and if they are abnormal, have a treatment plan."

Maryland athletic director Damon Evans acknowledged last month that "mistakes were made" by the training staff in the treatment of McNair, a sophomore offensive lineman.

The findings were shared with McNair's family before they shared the report with the public, CBS Baltimore reports. McNair's parents have spoken out against the head coach, DJ Durkin, who is still on administrative leave.

"Our son's death cannot and should not be a political football for competing factions or agendas or to settle prior scores," the parents of Jordan McNair wrote in a statement.

Terrapins head coach DJ Durkin is on administrative leave while an unrelated external investigation into the culture of the football program is being conducted.