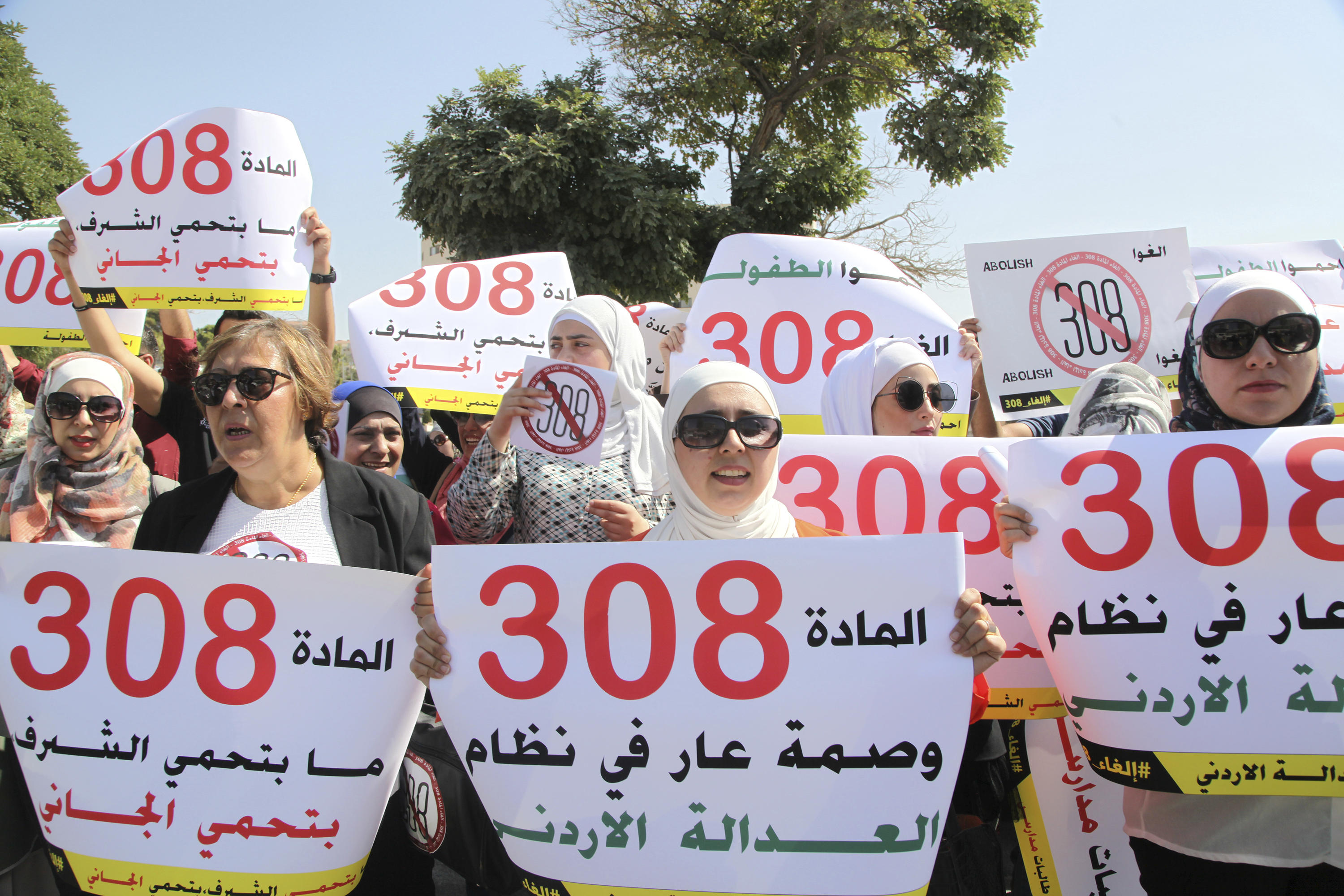 AMMAN, Jordan -- The lower house of Jordan's parliament on Tuesday scrapped a provision in the kingdom's penal code that allowed a rapist to escape punishment if he married his victim.

Cheers erupted from the spectators' gallery as legislators narrowly voted for repeal, following an emotional debate.

The vote was hailed as a major step forward for women in the conservative kingdom.

"This is a victory for the women's movement and human rights movement in Jordan," said Salma Nims, the secretary general of the Jordanian National Commission for Women.

Despite the country's pro-Western political orientation and cosmopolitan urban elites, many areas of Jordan remain socially conservative, with entrenched notions of "family honor."

This includes the belief that having a rape victim in the family is shameful, and that such "shame" can be expunged through marriage.

In Tuesday's debate, some lawmakers had argued that an amended version of Article 308 was needed to protect rape victims against social stigma by giving them the marriage option.

In the end, lawmakers voted in line with the recommendations of the government and a royal committee on legal reforms.

The decision must still be approved by parliament's appointed upper house, or Senate, and by King Abdullah II. After the expected final approval, Jordan would join Tunisia, Morocco and Egypt which have canceled their "marry the rapist" clauses over the years.

The international rights group Human Rights Watch said Lebanon's parliament is also considering repealing such a provision. The clause remains on the books in several other countries in the Middle East and Latin America, as well as in the Philippines and Tajikistan, HRW said.

In a statement issued before Tuesday's vote, the New York-based watchdog said that scrapping Article 308 "would be a positive step to strengthen the rule of law and end impunity for violence against women."

Ahead of Tuesday's vote, several dozen activists rallied outside the parliament in Amman, the Jordanian capital, calling for repeal. They held up banners reading "Article 308 is a disgrace to the Jordanian justice system" and "Article 308 does not protect honor, it protects the culprit."

Nims said before the vote that many of the lawmakers had been undecided.

She said some saw the provision as a form of "protection" for women who can demand marriage rather than suffer further social stigma for having been raped.

The need for such "protection" indicates a fundamental problem in how Jordanian law and society perceive women, said Eva Abu Halaweh, executive manager of Mizan for Law, a human rights group.

Earlier this week, parliament took another step toward legal reform, closing a legal loophole that had given courts the discretion to impose sentences of as little as six months on those who killed female relatives in the name of "family honor."

Under the new amendment, killing "in a fit of rage" can no longer be considered a mitigating circumstance in such cases.